Lisa Goldstein is joining us today to talk about her novel Ivory Apples. Here’s the publisher’s description:

Ivy and her sisters have a secret: their reclusive Great-Aunt is actually Adela Martin, inspired author of the fantasy classic, Ivory Apples. Generations of obsessive fans have searched for Adela, poring over her letters, sharing their theories online, and gathering at book conventions. It is just a matter of time before one fan gets too close.

So when the seemingly-perfect Kate Burden appears at the local park, Ivy knows that something isn’t right. Kate has charmed the entire family, but she is suspiciously curious about Ivory Apples. And Ivy must protect what she and her Great-Aunt share: magic that is real, untamable, and—despite anyone’s desire—always prefers choosing its own vessel. 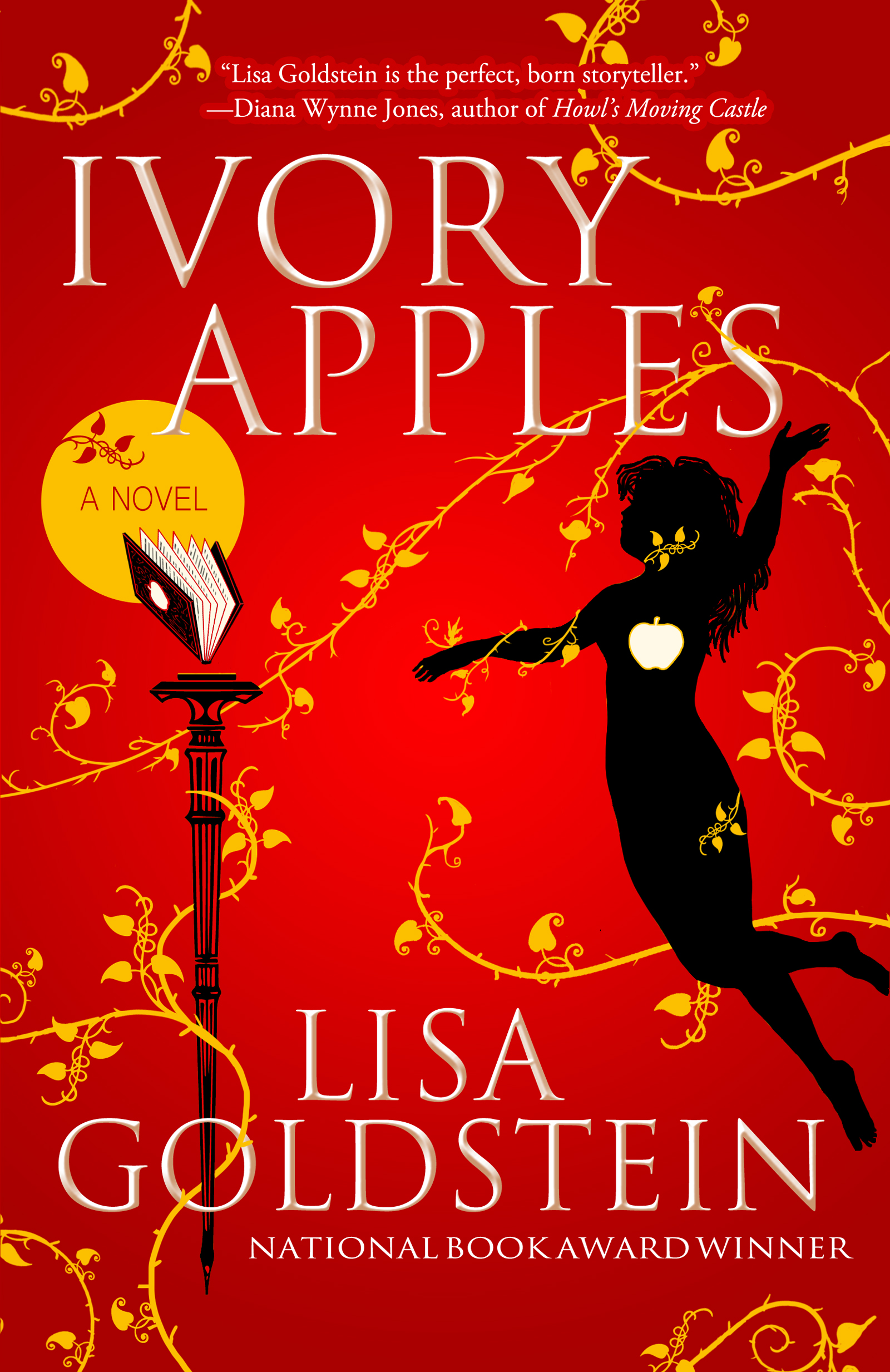 A long time ago I wrote a story about a man whose mother died.  Like a lot of people, my own mother had trouble with the difference between fiction and non-fiction, and she was worried that the story meant that I wanted her to die.  I spent a lot of time trying to explain to her that of course that wasn’t true, that stories didn’t work that way.  I told her that the man and his mother were made up, not based on anyone I knew.  I told her that the point of the story — the point of every story — was to give the main character a problem to deal with, and that the man’s problem was so terrible because he had loved his mother very much.  Even after all of that, though, she wasn’t convinced.

It was only years later that I realized I had never written about a problematic mother, and that part of the reason was that I worried about what she would think.  (She read everything I wrote.  Well, everything I showed her, anyway.)  After she died, though, I started a novel about the worst mother figure you could imagine.

That sounds bad, doesn’t it?  I didn’t run to the computer the day we buried her, really.  I started the book several years later, and even then I didn’t completely understand why I felt free to write it.

It’s true that this person, Kate Burden, shared some characteristics with my mother, but she was far, far worse, something out of nightmare.  She was based on other scary people in my life as well: an ex-boyfriend, a particularly bad baby-sitter, liars and hypocrites I’d known, people who enjoyed inflicting emotional pain.  She was the product of something that had bothered me all my life, that if someone is charming and delightful, at least superficially, they can get away with a lot, especially if they prey on the marginalized, on people who aren’t as popular as they are.  That even if you point out their lies — that they said one thing yesterday and the exact opposite today — most people will shrug and say that you must have misunderstood, or that it isn’t important anyway.

It turned out that I flat-out loved writing this character.  I had a great time coming up with malicious things for her to do.  A lot of people have pointed out that evil characters are more interesting than good ones, that, for example, Paradise Lost moves faster when Lucifer shows up, and slows down in the scenes with that boring God character.  What I didn’t know was that they’re a lot of fun to write, too, maybe because your subconscious is let off the leash and can come out to play.  When I described the book to a friend of mine he called the her “evil Mary Poppins,” which is a perfect description of what I wanted to do.

Another reason I liked writing this part is that I got to tell these shadowy figures from my past that I’d understood what they’d been up to.  I’d lost track of most of them and there’s no chance they’ll ever hear of the book, let alone read it, but I still enjoyed getting it all down.  That boyfriend I mentioned earlier, who had once said that he couldn’t see me because his grandfather was dying, and then a month later told me about the great day he’d had with his grandfather — did he really think he’d gotten away with it?  It wasn’t the lie that offended me as much as the fact that he couldn’t even keep his story straight.

Ms. Burden seduces her way into a family and gains more and more control over the four children, especially the oldest, Ivy.  To write this part I had to go back to the helplessness I felt at that age, the sense that the adults around you have outsized power, that you have to trust them because you have no choice.  I thought about the things that would have angered or upset or embarrassed me, and I had Ms. Burden visit them on Ivy and her younger sisters.  She buys Ivy new clothes, but they’re just slightly too small.  She drops Ivy off at a dentist in a decaying, unfamiliar neighborhood, and then leaves her there with no way to get home, and only comes to pick her up after they close, after Ivy has almost given up hope.

Ms. Burden also uses magic to help her, but what she doesn’t know that Ivy has her own magic.  And here, using fantasy, I got to take old childhood traumas and rewrite them.  I didn’t make them “better” — Ivy still goes through horrors before the end — but I gave them the shape of a story.  I made more sense of them, for myself and I hope for the reader.  So it was — well, I wouldn’t say “fun,” but there was even something helpful about this part as well.

Lisa Goldstein’s latest novel, Ivory Apples, has just come out from Tachyon Press.  Her other novels include The Red Magician, which won the American Book Award for Best Paperback, and The Uncertain Places, which won the Mythopoeic Award. She has also won the Sidewise Award for her short story “Paradise Is a Walled Garden.”  Her stories have appeared in Ms., Asimov’s Science Fiction, The Magazine of Fantasy and Science Fiction, and The Year’s Best Fantasy, among other places, and her novels and short stories have been finalists for the Hugo, Nebula, and World Fantasy awards.  She lives with her husband and their irrepressible Labrador retriever, Bonnie, in Oakland, California.  Her web site is www.brazenhussies.net/Goldstein.