Karina Sumner-Smith is joining us today with her novel Towers Fall. Here’s the publisher’s description:

War. Fire. Destruction. Xhea believed that the Lower City had weathered the worst of its troubles—that their only remaining fight would be the struggle to rebuild before winter. She was wrong.

Now her home is under attack from an unexpected source. The Central Spire, the City’s greatest power, is intent on destroying the heart of the magical entity that resides beneath the Lower City’s streets. The people on the ground have three days to evacuate—or else.

With nowhere to go and time running out, Xhea and the Radiant ghost Shai attempt to rally a defense. Yet with the Spire’s wrath upon them, nothing—not their combined magic, nor their unexpected allies—may be strong enough to protect them from the power of the City.

From Nebula Award–nominated author Karina Sumner-Smith, Towers Fall is a fantastic climax to this amazing and thought-provoking trilogy. 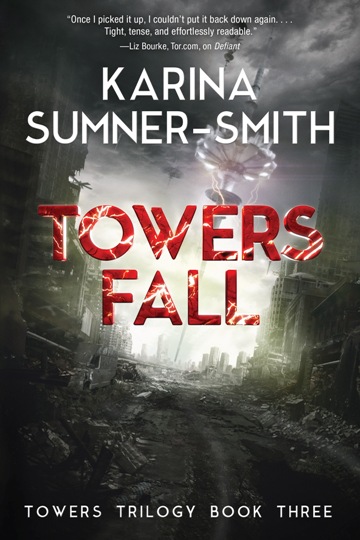 There is so much riding on the third book in a trilogy. It’s a book that has to be a whole story in and of itself, while simultaneously connecting to and creating resonances from the earlier books. It has to tie up all those loose ends. It has to justify all the words that have come before.

Writing Towers Fall, the third and final book in my Towers Trilogy, was an exhilarating, stressful, chaotic experience, one that I loved and loathed in equal measure. I was in love with the story, with finally reaching the conclusion that I’d been working toward for so very long—and was absolutely terrified that I was going to mess it up.

And yet my favorite moment in that whole writing process wasn’t actually finishing the story (glorious as that was), nor turning it in, but a moment of sudden understanding that occurred when I was in the middle of writing the first draft. Obvious as it seems in retrospect, there was a moment where I suddenly realized: I had been wrong about these books from the start. For all my protestations that the Towers Trilogy books do not, will not include a romance … they do. It was there the whole time.

While these books aren’t about a romantic relationship in the traditional sense, they are very much a love story.

No one questions the sacrifices one would make for a lover or spouse; it does not seem strange for a character to fight and struggle to the ends of the earth to help or save their child or a sibling. But to go to such lengths for someone who is “only” a friend? Hardly.

It seems to me that relationships that are not bound by blood or sex are seen as somehow lesser. We say that someone is “only” a friend; there is the (frustrating, awful) talk of the “friend zone,” as if a friendship is an undesirable consolation prize. And the idea that friendship alone would be enough to motivate someone to great and terrible lengths seems foreign to some individuals.

Yet that mindset is so opposite to my own life experience, feelings, and understanding of friendship. I have friends who are best described as my family-of-choice; my spouse is also my dearest friend. (And yes, my strange, prickly main character takes after me more than some realize. If one of my close friends needs the world burned down? Darling, hand me the matches.)

So it’s no wonder that the heart of these books for me has always been the relationship between Xhea and Shai, two young women from opposite ends of their society who develop a deep connection despite their many differences. Yet, even knowing that their friendship was the heart of the story, only in writing Towers Fall was it clear that, though there is no traditional romantic plotline, no sex or even kissing, these two women love each other.

That love, that connection, that devotion, not only drives the books, but it changes their world around them. Everything that happens, good and bad, is because they found each other. Because they save each other, time and again.

There is one scene in Towers Fall that dives right into the core of their relationship, and is perhaps my favorite scene in the whole trilogy. As it comes in the book’s last third, I hesitate to say too much lest I ruin the scene for new readers; but it’s about the worst thing that could happen to these two characters, both physically and emotionally—and it leads to a moment of perfect joy and catharsis.

Writing that scene felt like tearing my heart open and healing the same wound in the span of a chapter. For those readers who have joined me on this journey—three whole books!—I think you’ll know the scene when you reach it.

For these characters to find joy and togetherness after everything they’ve been through—all the sacrifices they made, all the trust they’ve built, all the things they’ve lost, all the love they found—well, I’ll admit it. Writing it, I cried, and they were tears of joy.

Karina Sumner-Smith is the author of the Towers Trilogy from Talos Press: Radiant (Sept 2014), Defiant (May 2015), and Towers Fall (Nov 2015). In addition to novel-length work, Karina has published a range of science fiction, fantasy, and horror short stories that have been nominated for the Nebula Award, reprinted in several Year’s Best anthologies, and translated into Spanish and Czech. She lives in Ontario near the shores of Lake Huron with her husband, a small dog, and a large cat. Visit her online at karinasumnersmith.com.