Kameron Hurley is joining us today with her novel Apocalypse Nyx. Here’s the publisher’s description:

Ex-government assassin turned bounty-hunter, Nyx, is good at solving other people’s problems. Her favorite problem-solving solution is punching people in the face. Then maybe chopping off some heads. Hey―it’s a living.

Nyx’s disreputable reputation has been well earned. After all, she’s trying to navigate an apocalyptic world full of giant bugs, contaminated deserts, scheming magicians, and a centuries-long war that’s consuming her future. Managing her ragtag squad of misfits has required a lot of morally-gray choices. Every new job is another day alive. Every new mission is another step toward changing a hellish future―but only if she can survive. 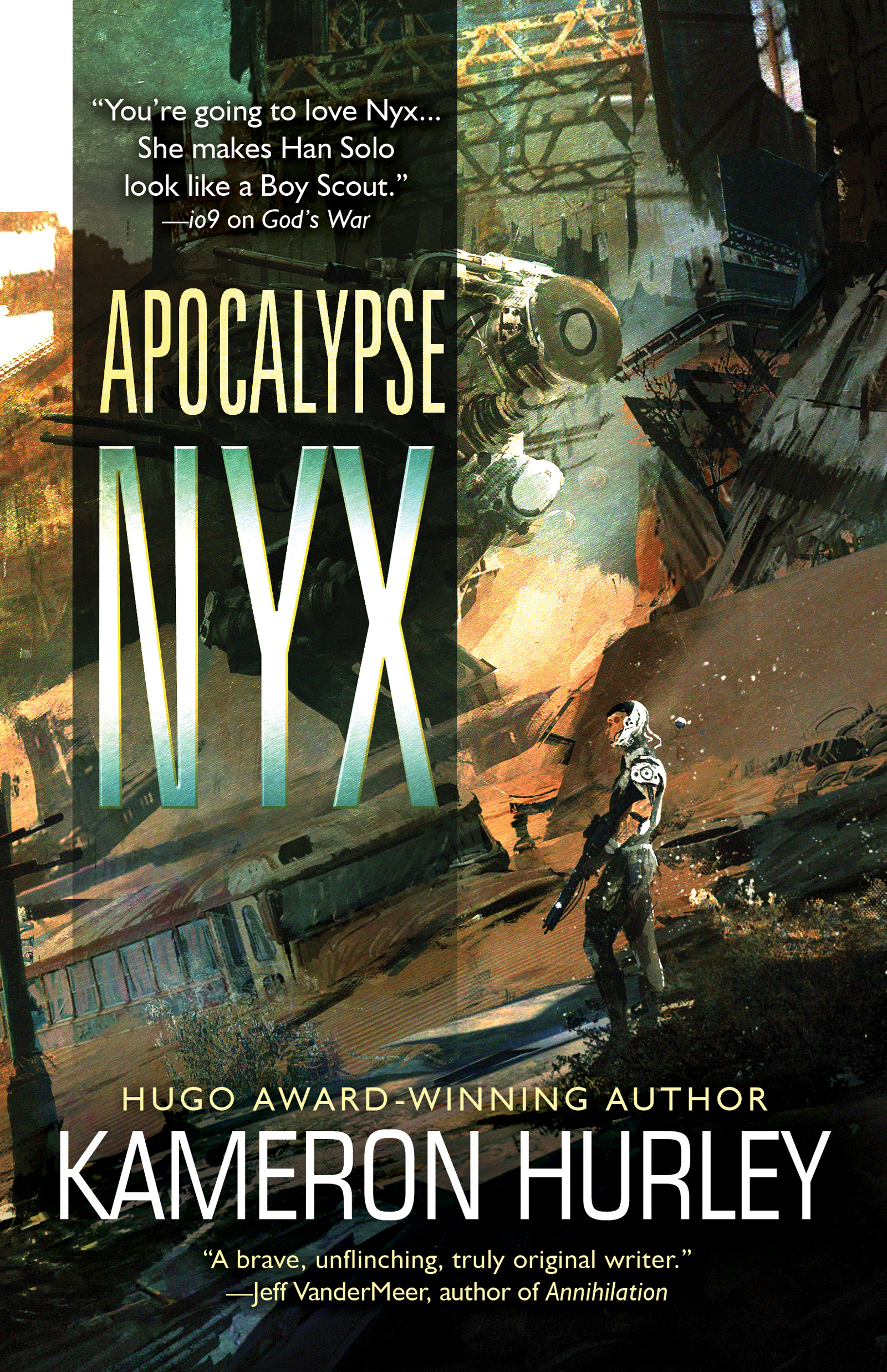 All literature is escapism. It takes us away from wherever we are and deposits us neatly into another place, another time, among people whose problems we don’t have to negotiate, manage, or solve in our daily life.

I grew up watching a lot of apocalyptic science fiction movies when I was a kid, probably for the same reason so many enjoy watching The Walking Dead. We all want to believe that when society breaks down and we run out of vaccines and hot water and canned food, that we’ll be one of the tough, lucky few to who can use our wits and our physical prowess to survive.

In reality, the odds are against us. Try talking to any amateur who’s planted a garden, and you’ll discover that growing enough food to feed yourself for a year is no small feat. Every time I battle the bugs eating up all my crops, I lament to my spouse: “How did people ever survive growing food like this?” to which he responds, “There were a lot fewer people.”

Being one crop failure or infected scratch away from death is a harrowing way to live. But if you spend most of your days shuttling to and from a boring, crappy job with crappy benefits with an abusive boss, falling over onto the couch at night and then doing it all over again, day in, day out, with no hope of an end date, there can be an allure in the idea of living more dangerously. Of living for something. Of knowing every second counts.

I learned a far greater appreciation for life when I nearly died at twenty-six. Going from great health to having a chronic illness was like getting hit on the back of the head with a shovel. It completely transformed my life. I realized, for the first time, just how close we all are to death. And I needed a new world to escape to more than ever.

I’m often asked, “Why do you write about terrible people?” Probably for the same reason most people do: we know terrible people. We, ourselves, often have terrible impulses. If you’ve ever sat in a cubicle all day, having a random dude ask you to get him coffee, and being berated, constantly, about how you need to be “civil” to people who are trying to take away your human rights and your friend’s citizenship, you know what it’s like to just want to throw your computer at the window and start punching people.

It happens to the best of us.

I had a dog, Drake, a very young, healthy dog, who contracted an antibiotic-resistant staph infection after a common surgery. We fought hard for that dog. He fought too. For some time, he was on an antibiotic drip that cost a thousand dollars a week to administer. We kept telling ourselves, “We can beat this. This is a modern era. We have pet insurance. He’s young. We have the best vets. We have the resources to save him.”

But nature won against us, and him, as it so often does. Bacteria, viruses, parasites – all those gooey living critters that want to break down our parts and mulch us back into the earth – they all win, eventually. Our big brains and big guns and big egos can only get us so far.

Perhaps it is this fantasy of a brutal hero surviving a brutal world that is my favorite part of writing about Nyx, the heroine in Apocalypse Nyx. Nyx is a hot mess of problems. She’s impulsive, callous, bad at relationships. But in her world, none of that matters. She isn’t spending time putting money into a 401(k) because she figures every job will be her last. She doesn’t take shit from a boss because healthcare is free and she has no trouble picking up freelance jobs to live. She doesn’t get sick, only hung over. She’s been inoculated against the worst of the world’s viral contagions. When she gets hit, she gets up. She keeps going. She’s notoriously hard, if not impossible, to kill. Her moral code is hers alone. She doesn’t care what anyone else thinks of her.

Nyx is the fantastically brutal escapist Conan I always wanted to see in the world. I keep coming back to her in projects like Apocalypse Nyx and in stories I share with Patreon backers, because her brutal simplicity, her unwillingness to think more than a few steps ahead, and her near-invulnerability make her a cozy tank to slip into when the world wants to grind me down. I suspect many of her fans love her for the same reason. She is the ever-persistent endurance athlete who will keep going long after everyone who bet on her to give up has gone back to the pub for a beer.

Of course, she is callous. She is a brute. I certainly wouldn’t want to be her friend, because she’d murder me in a heartbeat if it would further her ends. But I wouldn’t want to be friends with Conan, either. They each belong to a very specific time a place. A place I enjoy visiting, but a place I would never want to live.

So, when the world gets you down, as it often does me, try slipping into a new skin once in a while. Go meet Nyx.

You won’t regret it.

Kameron Hurley is the author of The Stars are Legion and the award-winning argumentative essay topics collection The Geek Feminist Revolution, as well as the God’s War Trilogy and the Worldbreaker Saga. Hurley has won the Hugo Award, Kitschy Award, BSFA Award, and Sydney J. Bounds Award for Best Newcomer. She was also a finalist for the Arthur C. Clarke Award, the Nebula Award, and the Gemmell Morningstar Award. Her short fiction has appeared in Popular Science Magazine, Lightspeed Magazine, and many anthologies. Hurley has also written for The Atlantic, Entertainment Weekly, the Village Voice, Bitch Magazine, and Locus. She posts regularly at KameronHurley.com. Apocalypse Nyx marks her return to the Bel Dame Apocrypha, first started in the acclaimed God’s War Trilogy.