Allow me to introduce you to Jeremy Zimmerman, who I first met when I was one of the pros at a writing workshop. At these things, you see a lot of stories that are… challenged.  But sometimes you get lucky and you get a writer like Jeremy, where you look at the story and think — “Hey! This guy can write. Thank god.”

He’s got a novella he’s going to tell you about.  The publisher’s description goes like this:

Cobalt City, Jewel of New England, has been the home of superheroes since the first people settled on the rocky shore. But as the old heroes move away, die, or retire, it falls to a new generation to step up and bear the burden—protecting Cobalt, and the world, from the nefarious plans of madmen and malicious Gods. Join a diverse band of new teen heroes as they pick up the mask, challenge destiny, and dare to become legends.

But let’s see what Jeremy says his Favorite Bit is…

Kensei is a superhero young adult novella set in the shared universe of Cobalt City. It’s being published with two other novellas under the title Cobalt City Rookies. Research for the character, who I originally envisioned as an opportunity to write someone very different from myself, involved the chance to reach out to other people, make new friends, and have deep conversations with old friends. A thirty-something straight white guy doesn’t try to write respectfully about a teenage lesbian biracial superhero without going outside his usual circles. But that isn’t my favorite bit. More than anything else, including flat track roller derby had a big impact on my life and the shared universe. 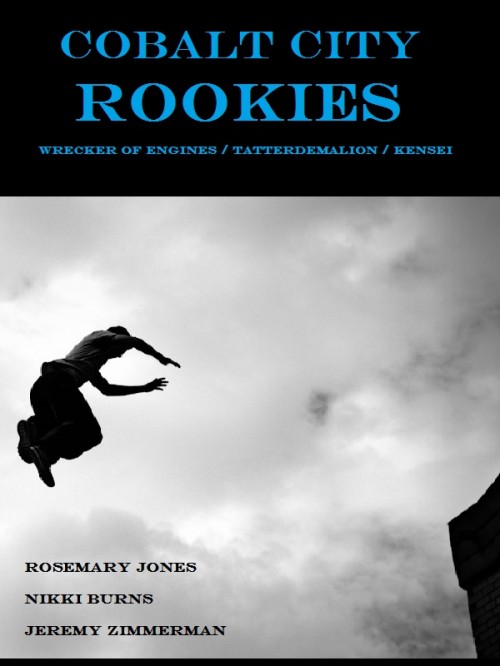 The titular character, Kensei, was born in a short story I had written for another project for Timid Pirate. When they first approached me to write Kensei into a longer work, I mulled around things I might want to include in the book that I’d wanted to write about. At that time, my wife and I had been fans of roller derby for a couple years and she had recently begun volunteering as an official for the Jet City Roller Girls and the Seattle Derby Brats. I had wanted to write something fantastical about roller derby, but hadn’t put anything to paper. While it didn’t work for my protagonist to play roller derby, I was soon able to find a way to use roller derby as both a plot element and a connection to other corners of the shared universe.

The first immediate challenge was understanding derby better. The idealized vision of the sport from the bleachers is not the same as the view from the ground. My wife banned me from roller skating after my first attempt ended in a fractured elbow and a trip to the emergency room (and physical therapy, and surgery, and more physical therapy…), so I volunteered in non-skating capacities. All told, the experience was positive. I’ve made many friends and gained a deeper appreciation and understanding of the sport.

Creating both adult and junior roller derby leagues that fit into the shared universe was the next hurdle I faced. My favorite derby league names often invoke some aspect of their city. Seattle’s Rat City Roller Girls invoke an old nickname for the Seattle-area neighborhood named White Center. Kitsap County’s Slaughter County Roller Vixens draws upon the original name for that county, named after Lt. William Alloway Slaughter.

But Cobalt City, being a fictional New England metropolis, had no origin for its name within the setting. Its history reached back to the American Revolution, where some of the stranger battles of the war had been fought. It was also a place that attracted more than its share of superheroes. But neither of these really provided any ideas. I consulted with the publisher, Wikipedia, and friends involved with roller derby. The first thing we came up with was that cobalt is used in glass and porcelain. Then we realized that the word “cobalt” comes from the German word “kobold,” which roughly translates to “goblin.” We decided on a disputed origin for the name, one which involves early Cobalt City’s glaziers and another that ties into pre-Cobalt City myths of goblins living in the area. The adult league became the Goblin Town Roller Girls, the junior league became the Glass-Eyed Dolls.

The part that takes this up another notch for me is the impact it had on the setting. After coming up with the disputed theories behind the name, Nathan Crowder included it in an episode of the audio drama, Cobalt City Adventures Unlimited. The previously unnamed river that runs through the city became the Puckwudgie River, a reference to the goblin-like creatures of Wampanoag folklore. And because of overlap with some elements of Kensei, another book written in the shared universe focused on one of the founders of the Goblin Town Roller Girls.

Making friends, getting a wicked scar from roller skating, and infecting a shared-world setting? I call that a win.

Jeremy Zimmerman is a teller of tales who dislikes cute euphemisms for writing like “teller of tales.” His short fiction has most recently appeared in 10Flash Quarterly, Arcane and anthologies from Timid Pirate Publishing. Kensei is his first book to see the light of day. In his copious spare time, he publishes Mad Scientist Journal. He lives in Seattle with five cats and his lovely wife (and fellow author) Dawn Vogel. You can learn more about him at www.bolthy.com and more about Kensei and Cobalt City Rookies at www.timidpirate.com.