For the first My Favorite Bit of 2013, we have Jaine Fenn who brings us Queen of Nowhere. Here’s what the publisher says about it.

When paranoia is a way of life, trust doesn’t come easily. The Sidhe look like us. They live amongst us. What they lack in numbers they make up with their fearsome mental abilities and the considerable physical resources at their disposal. And their biggest advantage? No one believes they exist. Almost no one. Bez, the best hacker in human-space, is fighting a secret war against them. Always one step ahead, never lingering in one place, she’s determined to bring them down. But she can’t expose the Hidden Empire alone and when the only ally she trusted fails her she must accept help from an unexpected quarter. Just one misstep, one incorrect assumption, and her Sidhe trap – her life’s work – could end in vicious disaster. Worse, if Bez fails then humanity may never have another chance to win free of the manipulative and deadly Sidhe …

I’m not a trained scientist. More unusually for someone who writes SF, I’m not a gadget-fiend, so whilst I understand the urge to sacrifice all at the altar of Shiny! I can resist.

A clever bit of tech in a story pleases me, and in my own stuff I try for consistency and scientific accuracy (except for the bits that obey Clarke’s Third Law), but I’ll never come up with some of the harder SF concepts writers that Alastair Reynolds or Charles Stross manage. 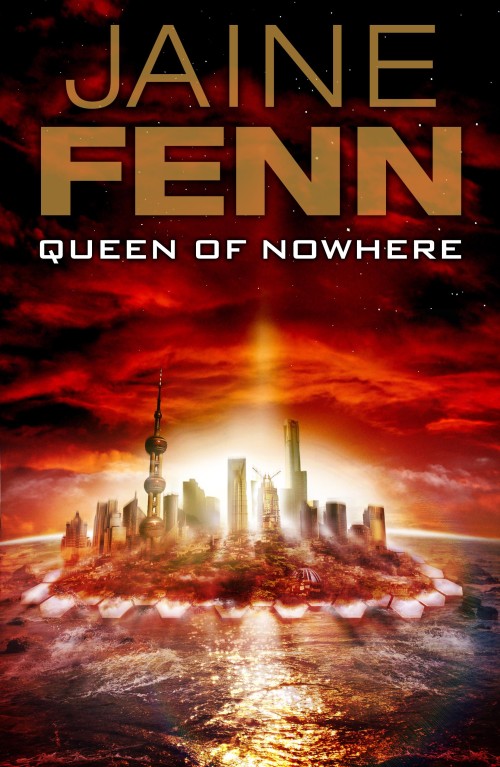 It’s the urge found in a lot of fiction, but which SF lets the writer indulge to the max: Megalomania.

In Queen of Nowhere I get to fully exercise my inner demi-god. The novel is the story of Bez, a genius hacker trying to bring down a galactic conspiracy that (almost) no one believes is real. That ‘almost’ is important, because she does encounter people who are in the know and who could be of help in her near-impossible task. Except, of course, they have their own agenda.

And here’s where the first authorial evil cackle can be heard, because obviously I know what her potential allies are really up to. Or even, in some cases, what they really are. Anyone who has read the earlier Hidden Empire books will know about certain characters, and I like the idea of readers who’ve followed those other story-lines being in on the secret too, though that’s not a necessity. But in one case, no one knows – although the clues are there if you look carefully. Bez herself only finds out the full truth at the very end, and though I’m obviously not going to let on what the deal is with her strangest ally, I will say this: it’s the sort of universe-changing secret you don’t get to play with outside the SF genre.

As well as messing the reality itself and having fun with the fates of my characters (bwa-ha-ha – sorry, that just slipped out), I also get to build whole new worlds. Several of them. Or rather, new cultures. I was a humanities student, and I love twisting the rules when creating new cultures, to see what comes out (hopefully without inadvertently thieving from or offending any existing human cultures – that can be a fine line to walk). I had a number of chances to come up with new worlds in Queen of Nowhere because although the book is Bez’s story, her plans affect the whole of human space. She visits several worlds in the course of the novel, and influences the fate of people on many others … and vice versa as, mistress of data though she is, she can’t know everything. And in this case, what she doesn’t know can definitely hurt her…

Jaine Fenn studied Linguistics and Astronomy at college before spending a decade and a half developing a healthy distrust of technology whilst working in computing. She lives in Hampshire, England with her husband and her books.

As well as numerous short stories she is the author of the Hidden Empire series which started in 2008 with Principles of Angels and is published by Gollancz. Queen of Nowhere is the fifth book in the series, but it’s not necessary to read all the preceding ones as there will not be a test.

She is nowhere near as smart as Bez.