Fonda Lee is joining us today with her novel Zeroboxer. Here’s the publisher’s description.

A rising star in the weightless combat sport of zeroboxing, Carr “the Raptor” Luka dreams of winning the championship title. Recognizing his talent, the Zero Gravity Fighting Association assigns Risha, an ambitious and beautiful Martian colonist, to be his brandhelm––a personal marketing strategist. It isn’t long before she’s made Carr into a popular celebrity and stolen his heart along the way.

As his fame grows, Carr becomes an inspirational hero on Earth, a once-great planet that’s fallen into the shadow of its more prosperous colonies. But when Carr discovers a far-reaching criminal scheme, he becomes the keeper of a devastating secret. Not only will his choices place everything he cares about in jeopardy, but they may also spill the violence from the sports arena into the solar system. 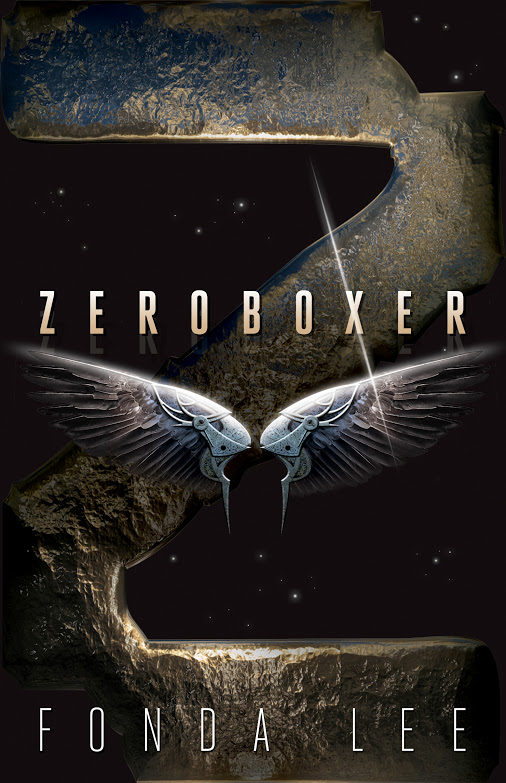 I’ve never been a big fan of black and white morality in stories. Good versus evil feels too easy, too wishful. Same with dystopias. Don’t get me wrong, there are many, many good dystopian novels and good-vs-evil stories on my favorites shelf, but I have never wanted to write one. It feels like a cop-out for me to start with “the whole world goes to hell” or “heroes will prevail over the evil oppressor” when I don’t really believe those things. I think the world, any recognizable world, real or fictional, magical or futuristic, is nuanced and complicated, with good things and bad things in measure, and full of people struggling with conflicting desires and pressures.

Young adult science fiction and fantasy novels are particularly prone to defiant young heroines who live in unrelentingly bleak societies and rise up to prevail against the seemingly overwhelming might of relentlessly evil adults. I’ve read and enjoyed some of these books.

Zeroboxer is not that YA novel. And that’s my favorite bit about it.

I love that I wrote and found a publisher for an action-packed YA sci-fi that embraces moral ambiguity instead of stripping it away.

It takes place in a future that’s not perfect, but certainly isn’t awful. There are positives and negatives to the changes that have been wrought by technology. Mars has been colonized and is a prosperous planet, but that has engendered jealousy and conflict from Earth. Genetic engineering has cured common ailments but its proper limits are debated, and its use can be abused.

There is political strife, but the main character, Carr, isn’t trying to save anyone, or survive in a dictatorship, or be a rebel leader; he just wants to succeed in his career as a zeroboxer. Unfortunately for him, he’s placed in tough personal situations with no clear right answer. I could debate anyone who argues that Carr’s actions are justifiable or not—and I love that.

Speaking of which, those weightless fight scenes? They’re my other favorite bit. But that’s another topic.

Fonda Lee writes science fiction and fantasy for teens and adults. Zeroboxer (from Flux/Llewellyn) is her debut novel. Fonda is a recovering corporate strategist, an avid martial artist, a fan of smart action movies, and an Eggs Benedict enthusiast. You can find Fonda at www.fondalee.com and on Twitter @fondajlee.