One of the things that I enjoy about Cassie Alexander is that she’s an actual nurse, so the medical stuff in her books is right. Her newest novel, Moonshifted, continues to follow Nurse Edie Spence as she tends to super-natural creatures. This time, her patient is the victim of a hit-and-run — oh, and he’s a werewolf.

It took a while for me to come up with my favorite bit from Moonshifted that wouldn’t be giving anything away – and then after I realized what it was, it seemed so self-evident. If you’re a writer, there’s always a few scenes you know you want to get to – one of the ones you write the entire rest of the book to get to write, and for me, that scene was the MRI scene near the end of the book.

MRIs are the magnetic resonance imaging machines that use electromagnets and radio waves to visualize internal parts of your body. Because of the way they’re constructed, using liquid helium to cool the superheated magnets, you can’t actually turn them off without “quenching” the magnets and releasing the helium off as a gas. They’re honest to goodness magnetic, all of the time – which sometimes people realize too late. 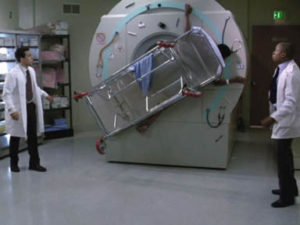 This was used as a side story on ER and also, I believe, in House. But it’s only fictionable for them (and me!) because people have had so many problems in real life.

Here’s an article about an off-duty cop getting his gun trapped in an MRI machine — the force of the magnetic field made the gun discharge.

And here’s a series of great images of things getting pulled into MRI machines – gurneys, wheelchairs, walkers, floor polishers, and most worrisomely, welding tanks.

And people desperately trying to get a chair out of an MRI machine (because quenching the magnet would cost them a ton):

Last but not least, my own MRI story – I’d been working a long shift when I had to take a patient down to MRI and I was down there with them sedating them (loooong story) for several hours, at the end of which my stomach hurt. For one horrible second, as I was leaning over the patient to reach their PICC line, all I could think was, “Jesus Christ, this thing had better not be sucking out my IUD!”…but then I realized I was just hungry. (What can I say, it’d been a really long shift.)

MRIs – they’re awesome, they’re a little scary, and the scene with the MRI in Moonshifted is definitely my favorite bit.

BIO:  Cassie Alexander is a registered nurse and the author ofMoonshifted, her second novel out from St. Martin’s Press.