Beth Cato is joining us to talk about her novel Roar of Sky. Here is the publisher’s description:

In this stunning conclusion to the acclaimed Blood of Earth trilogy—a thrilling alternate history laced with earth magic, fantastic creatures, and steampunk elements—geomancer Ingrid must find a way to use her extraordinary abilities to save her world from the woman hell-bent on destroying it.

Thanks to her geomantic magic, Ingrid has successfully eluded Ambassador Blum, the power-hungry kitsune who seeks to achieve world domination for the Unified Pacific. But using her abilities has taken its toll: Ingrid’s body has been left severely weakened, and she must remain on the run with her friends Cy and Fenris.

Hoping to learn more about her magical roots and the strength her bloodline carries, Ingrid makes her way across the Pacific to Hawaii, home to the ancient volcano goddess Madam Pele. What she discovers in this paradise is not at all what she expects—and perhaps exactly what she needs.

But Ambassador Blum comes from the same world of old magic and mythic power. And if Ingrid cannot defeat her once and for all, she knows Blum will use that power to take the lives of everyone she holds dear before escalating a war that will rip the world to pieces. 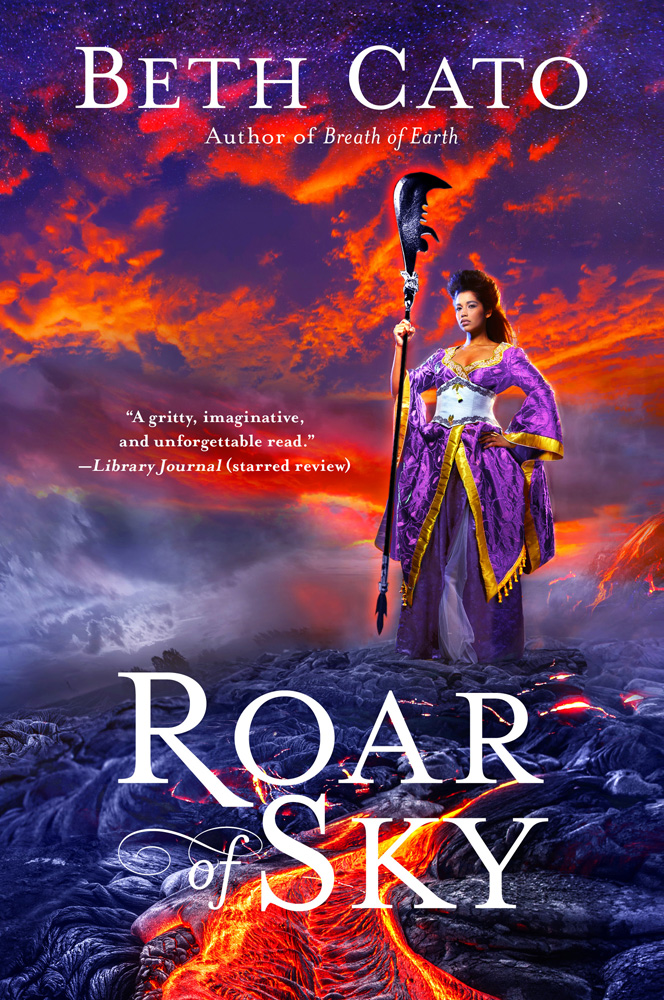 I’m a total history geek. The alternate history 1906 of my Blood of Earth trilogy has given me ample opportunity to dig into dusty old library discards, skim century-old magazines, and to Google away endless hours.

The first book in the series, Breath of Earth, rewrites the Great San Francisco Earthquake and Fire with a fantastical twist of geomancy and incredible creatures. The second book, Call of Fire, takes my characters to the Pacific Northwest, where slumbering volcanoes might awaken in a cranky mood.

An advantage I had in researching these two books is that had I lived near or in the locales I was writing about. However, as I started the outline for the trilogy finale, Roar of Sky, I realized I didn’t have that advantage. I needed to begin that book in the Hawaiian Islands, the Big Island in particular.

Therefore, in the name of research, I had to make a great sacrifice of time and money and travel to Hawaii. Oh darn.

It’s easy to joke about this being the best tax write-off ever, but there was no denying it was a work trip. I dragged my husband out of bed at 5 o’clock every morning, at the latest, to hike and explore before the sun was even up. I’d read extensively to prepare for our trip–not just modern travel guides, but century-old travelogues by writers like Mark Twain and Isabella Lucy Bird. I didn’t bother to pack a swimsuit; instead, I brought portable emergency kits in case we stumbled on dry lava (a’a is some wickedly sharp stuff) and collapsible hiking sticks.

The Halema’uma’u Trail at Volcanoes National Park topped my wish list. A century ago, nighttime visitors traveled on horseback down a heavily forested series of switchbacks to the crater floor, where the journey continued on foot across the old lava flats to the shores of Halema’uma’u. This is the lava lake long-regarded as the home of Madame Pele, goddess of volcanoes. Back then, visitors played at the very edge of the lava. They singed postcards to mail as souvenirs and tossed coins in the molten flow to see how quickly they would melt.

Safety standards are a bit higher now. We took the trail by foot from Volcano House, a famous hotel right on the rim, and followed steep switchbacks and moss-lined holloways to the dried lava basin below. This may sound corny, but the experience didn’t simply feel informational at that point, but emotional. Spiritual. I’ve lived with my characters since 2013 and spent hundreds of hours with them in their world. Now I was walking in Ingrid’s and Cy’s footsteps. I was giddy and babbling, taking pictures of everything, rattling off historical trivia. My husband, bless him, smiled and nodded.

At the bottom, we stepped from thick rainforest onto swells of dried black lava. Far across the field of the rippled yet smooth pahoehoe flow, we could see the plume of Halema’uma’u. Signs forbade us from going further due to the toxic fumes. Even so, I was thrilled to stand there, to feel the strangely hollow tap of lava underfoot, to take in the reality of a place I’d studied by book for months.

That experience feels even more poignant now with recent events on Kilauea. In May, a series of fissures opened up in the Puna district to the east, draining Halema’uma’u and causing a massive collapse of the surrounding lava fields and cliff. By massive, I mean the lake is now a 1,500-foot pit with no molten lava visible. Repeated large earthquakes damaged the incredible Jagger Museum on the rim. The Halema’uma’u Trail down the cliff was blocked by enormous boulders. Volcanic activity decreased as the summer went on, and Volcanoes National Park has recently reopened to a limited degree.

In Roar of Sky I describe the lava lake as it was a century ago, much larger than during my visit in January 2017. As I wrote, I wondered if readers would believe it all: that tourists ventured across the treacherous terrain at night and roasted hot dogs over bubbling lava. Now, I can’t help but shake my head in awe after nature’s most recent show.

I hope that someday I can return and take in the changes for myself. For now, I know with certainty that the Big Island is one of my favorite places to read about in history, and to write about, and to visit. I only hope I did it some justice in Roar of Sky.

Nebula-nominated Beth Cato is the author of the Clockwork Dagger duology and the new Blood of Earth Trilogy from Harper Voyager. She’s a Hanford, California native transplanted to the Arizona desert, where she lives with her husband, son, and requisite cats. Follow her at BethCato.com and on Twitter at @BethCato.