Alethea Kontis is joining us today with her novel, Hero. Here’s the publisher’s description.

Rough-and-tumble Saturday Woodcutter thinks she’s the only one of her sisters without any magic—until the day she accidentally conjures an ocean in the backyard. With her sword in tow, Saturday sets sail on a pirate ship, only to find herself kidnapped and whisked off to the top of the world. Is Saturday powerful enough to kill the mountain witch who holds her captive and save the world from sure destruction? And, as she wonders grumpily, “Did romance have to be part of the adventure?” As in Enchanted, readers will revel in the fragments of fairy tales that embellish this action-packed story of adventure and, yes, romance. 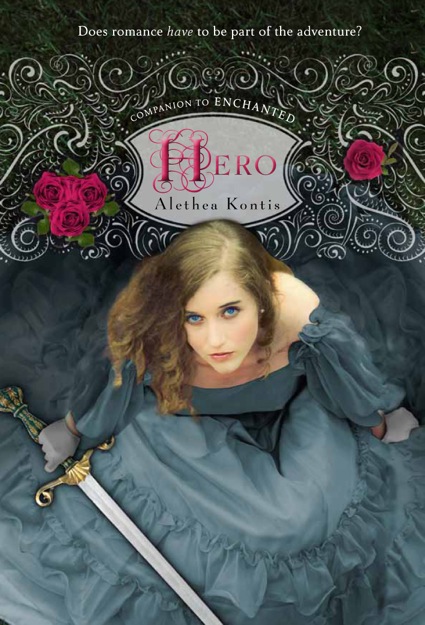 My favorite bit about Hero, my second novel and seventh published book, should be that it happened at all. When Enchanted was accepted and we pitched the rest of the Woodcutter Sisters books, the publisher politely said, “We see Enchanted as a stand-alone novel.” When Enchanted sold out its first print run in the first few weeks of release, the publisher politely said, “Remember how you said you had other books planned? We’d like two more please. The first one is due in three months.” And I actually delivered it on time. That should be the best part.

But in truth, my favorite bits about Hero are still the cross-dressing and mistaken-identity bits.

I blame this on my parents, who took my little sister and me to every Shakespeare in the Park under the sun when we were growing up. As young as six and eight, Soteria and I were blossoming child actresses with a deep appreciation for the stage. My parents didn’t have a lot of money back then, and Shakespeare in the Park was often free.

Shakespeare in the Park was generally held in the summer, and was by and large comedic. Fortunately, Shakespeare wrote a wealth of comedies, many of them involving fairies, cross-dressing, and mistaken identities. And all of them, in some way, shape, or form, concerning love.

Clothes have always been a problem for me. My young life contained two sets of clothes: t-shirts and jeans, and costumes. Through grade school, this sort of thing isn’t really a problem. When one emerges from university and is expected to be a functioning member of society, this is suddenly a Big Deal.

I have always hated dresses, and therefore never knew how to dress “as a girl.” Similarly, after experimenting with makeup for an entire year in middle school, I gave it up completely. It wasn’t until I was thirty (and trying to impress a boy) that I attempted wearing skirts in public. I almost couldn’t leave the house–I felt naked.

But women did this all the time. Society even expected it. So I walked out the door that day and into the rest of my life. I hooked up with a friend who became my personal shopper for a time, and taught me about fashion. I read books. I began to appreciate my body instead of hiding it. I looked forward to finding a style that was all my own.

And then I started getting snide comments at the corporate job where I had worked for almost a decade. I wore a matching red plaid skirt and hat to work one day and was asked if I was “in costume.” A few months later, I received a formal reprimand for “not adhering to the dress code”, though they refused to be specific as to my crimes. (I quit shortly after that incident.)

I look in my closet now, four years later, and what do I see? T-shirts and jeans. Costumes. (And a section I like to call “convention casual.”) I get compliments all the time on my corsets and my hair jewelry and my face paint (it’s not just makeup, it’s ART). Turns out I’ve known who I was all along. I even had the right wardrobe. I was just in the wrong place.

In Hero, the female protagonist wears trousers and is mistaken for her brother. The male protagonist has been cursed into taking the place of the blind witch’s daughter, and so wears skirts and pretends to be female so his “mother” doesn’t kill him. I wanted to not-so-subtly remind the young people of today that clothes may be an expression of who you are, but they are not the definition. I hope, even in some small way, that I achieved that goal.

Want to know a secret? I really wanted to call the male protagonist Orsino, but I was afraid that would be too obvious a Shakespeare reference so I stuck with Peregrine. I am thrilled, however, that we got to keep Hero as a title. Because, though “hero” is a male-centric word, it’s also the name of a character from one of Shakespeare’s famous comedies.

And she’s a girl.

New York Times bestselling author Alethea Kontis is a princess, a goddess, a force of nature, and a mess. She’s known for screwing up the alphabet, scolding vampire hunters, turning garden gnomes into mad scientists, and making sense out of fairy tales.Alethea is the co-author of Sherrilyn Kenyon’s Dark-Hunter Companion, and penned the AlphaOops series of picture books. Her short fiction, essays, and poetry have appeared in a myriad of anthologies and magazines. She has done multiple collaborations with Eisner winning artist J.K. Lee, including The Wonderland Alphabet and Diary of a Mad Scientist Garden Gnome. Her debut YA fairy tale novel, Enchanted, won the Gelett Burgess Children’s Book Award in 2012 and was nominated for both the Andre Norton Award and the Audie Award in 2013.