A. E. Decker is joining us today to talk about her novel Into the Moonless Night, the third in the Moonfall Mayhem series. Here’s the publisher’s description:

Catch Starthorne has spent a lifetime running from the prophecy that names him as the one who will save the shifter race, but now that he has returned to his home in Clawcrags, he may have to face his destiny. Determined to slip through fate’s fingers, Catch sows confusion, making friends from foes, mixing up the occasional sleeping death potion, and matching wits with an overbearing lion-shifter, who appears to have plans of his own.

While Catch schemes, Ascot works to retrieve him with the help of a witch and a pair of madcap shifter rebels. But every attempt to reach him earns her fresh enemies and embroils her ever deeper in the conspiracies surrounding the prophecy. After five hundred years of repressed tension and social strife, the Clawcrags are ready to explode—and it sometimes seems someone’s working hard to see that they do! 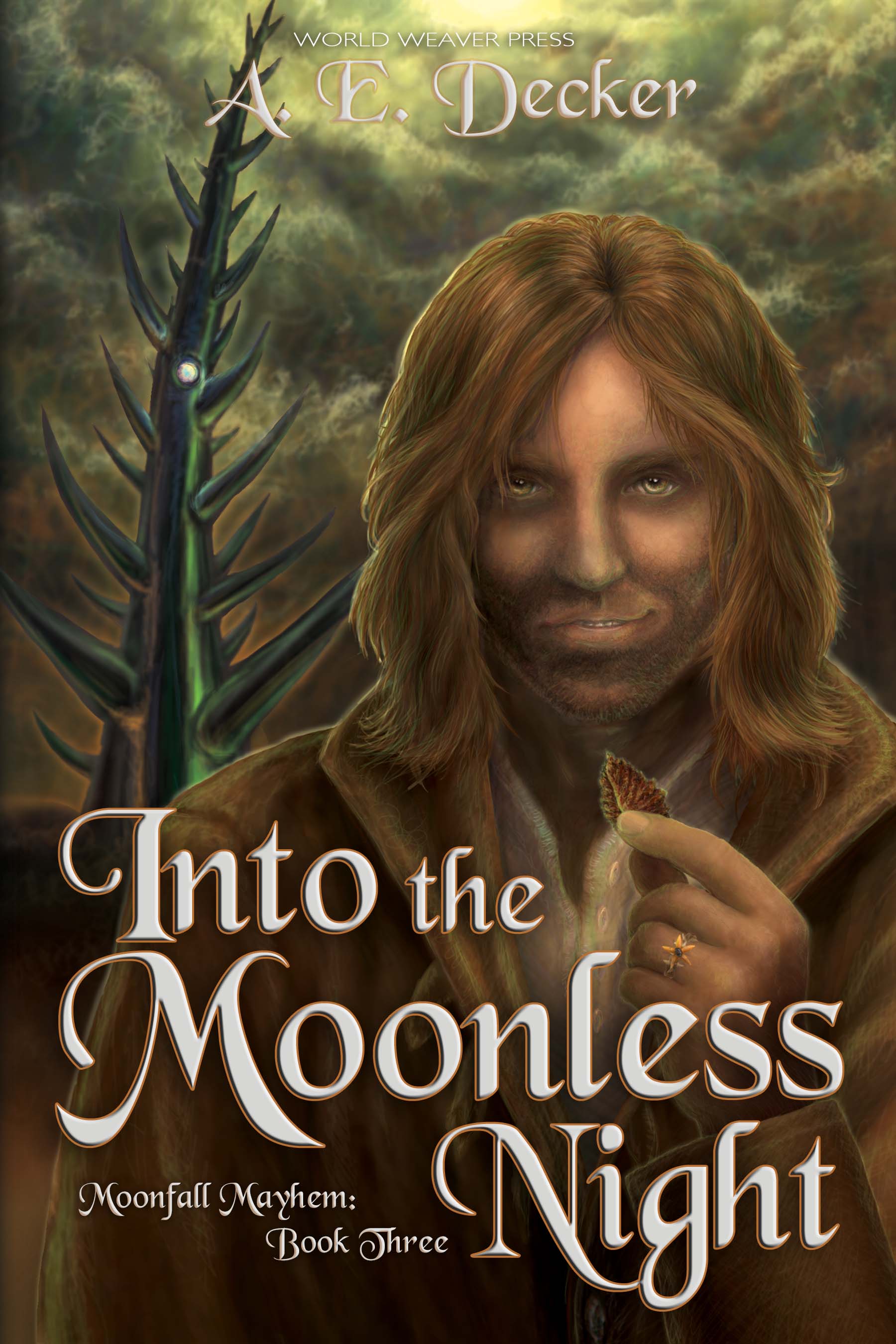 A mist hung in the air. Through it, I could see a group of people gathered around a wharf by a canal. They talked animatedly amongst themselves as they unloaded crates. I approached, sensing some charged excitement about them, as if a longed-for event was finally about to unfold. One of the men turned around and spotted me. He was tall, with sharp features, wearing a long, faded red coat. “Hey,” he said. With a welcoming—if slightly devilish—smile, he embraced me.

And then I woke up.

Fortunately, this wasn’t the last scene of a novel, or I’d have thrown it against the wall. No, this was an actual dream. It was also my introduction to Starley Reftkin, who was to become my favorite bit of book three of the Moonfall Mayhem series, Into the Moonless Night.

I always knew Into the Moonless Night was going to involve a revolution. Its protagonist, Catch Starthorne, is a Smilodon-shifter who has labored his entire life under a prophecy that named him the savior of the shifter race. In his homeland of the Clawcrags, a person’s place in society is ordained by what type of animal one transforms into, with lion-shifters as leaders. Catch escaped the Clawcrags twenty-five years ago and has only now returned to confront the tensions threatening to tear his society apart.

So, Catch gets to play his part deconstructing the “Chosen One” trope. That’s well and good for him, but what about the shifters who actually had to live under their unjust system while he was away? What about the ones who decided to fight it?

That’s where Starley comes in. With panache.

With a small explosion of hay, a pale man vaulted from the barn loft, twisted mid-air, and caught the pulley one-handed. When he landed, it was on his feet, and with a second crossbow pointed directly at Savotte’s head. “Count the bolts again, leather-britches,” he called.

Cavall spun around. His shocked expression transformed into one of pure, distilled outrage. “Starley Reftkin!”

Grinning from ear-to-ear, the pale man bowed, sweeping back a tail of his faded red coat. Even his eyelashes were white, as were his arched brows. A somewhat long, pointed nose and a droll mouth gave a look of deviltry to his otherwise heart-shaped face. A red bandana kept his shoulder-length white hair out of his eyes.

Visibly grinding his teeth, Cavall cast a swift glare over his shoulder at Jolt. “I should’ve-”

Starley held up a finger in the most insolent gesture Ascot had ever seen. It stopped Cavall mid-sentence. Dipping into his pocket, crossbow never wavering, Starley came up with a small jar, undid the cork with his teeth, scooped up a finger-full of the salve inside, and rubbed it over his face.

“That’s better,” he said, recorking the jar. He squinted at the sun, murky gray eyes narrowing. “Brighter day than expected. I burn so easily. Right.” He tucked away the jar and waggled the crossbow. “Yes, Galen, yada, yada, you should’ve expected, whatsit. Doesn’t matter, now, does it? Because I twitch my finger, and Rainy has a fresh hole in her head. My comrade there can do likewise to you. So frankly, since we’re starting to look like some great whatsit-centipede-all lined up like this, why don’t you two step back and let us walk away with Starthorne?”

Starley is a fighter, and a revolutionary leader. But although I’m as big a fan of Les Miserables as the next person, I knew he was no Enjolras, even if he wore red. That devil-may-care grin I’d seen in my dream kept returning to me, even as other details faded. As I mused on him, pulling together the pieces of plot, it came to me that what made Starley different from your usual fearless rebel types was that he believed in his cause—justice, equal rights for shifters—enough not only to risk death for it, but also utter humiliation. I’d never seen that before. Revolutionary leaders are generally so serious and dignified.

“How much are you willing to risk?”

“Everything,” replied Starley instantly. “No joke. I don’t care if I die if it means getting a chance to live first. Hang it, all the ambitions, all the soddin’ dreams that die because of our system—the stupidity of it makes me want to bite my own arse.”

“Don’t challenge him to actually do that, because he will,” said Jolt.

He could do it, too. When I was still in the process of creating Starley, I realized that as a shifter rebel, I needed to assign him some kind of animal to transform into. I chose a weasel. One of the defining attributes of the Moonfall Mayhem series is that I try to bend standard tropes, and weasels have a dreadful reputation. Even the otherwise excellent Zootopia made its weasel character stereotypically sneaky and cowardly. In actual fact, weasels are tremendously brave little animals, devoted to their young, and possessing a number of clever tricks for catching prey. When I saw a YouTube video featuring a stoat doing a “weasel war dance” to mesmerize a rabbit, I knew I had to include the scene somehow.

But you’ll have to read Into the Moonless Night to find out exactly how I worked it in. Starley enters around page thirty-three. You can’t miss him. He’s the queer, albino, weasel-shifting revolutionary leader who just wants to help create a world where all people stand as equals.

Even if he has to bite his own arse to accomplish it.

He’s my favorite bit of Into the Moonless Night. I hope you enjoy making his acquaintance.

A. E. Decker studied both English and colonial American history. She has worked as an ESL tutor, a tai chi instructor, and a doll-maker before turning to writing. In addition to the Moonfall Mayhem series published by World Weaver Press, her work has appeared in such venues as Beneath Ceaseless Skies, Fireside Magazine, and numerous anthologies. She is a member of, and editor for, the Bethlehem Writers Group. Like all authors, she is owned by three cats.