After Harriet’s passing, Rob and I knew that we wanted to adopt another rescue cat. Everyone at our veterinary clinic, Village West, was wonderful with Harriet and very understanding of what we were going through. They also run a rescue program, Critical Animal Relief Foundation.

So, we decided that when we were ready, we’d adopt from them.

Left to our own devices, I think we would have waited longer, but Marlowe was clearly lonely without a companion. He’s always lived in a two-cat household and when we’re gone during the day… he’s very vocal and needy when we get home. So– So it was time.

I talked to Alexis at CARF about what we were looking for personality-wise and she narrowed the choices down to three and arranged a meet and greet for us. At two o’clock today, we met this charmer and brought her home. She had a code name, which is one of the ones under consideration, but we want to get to know her a little better before we settle. 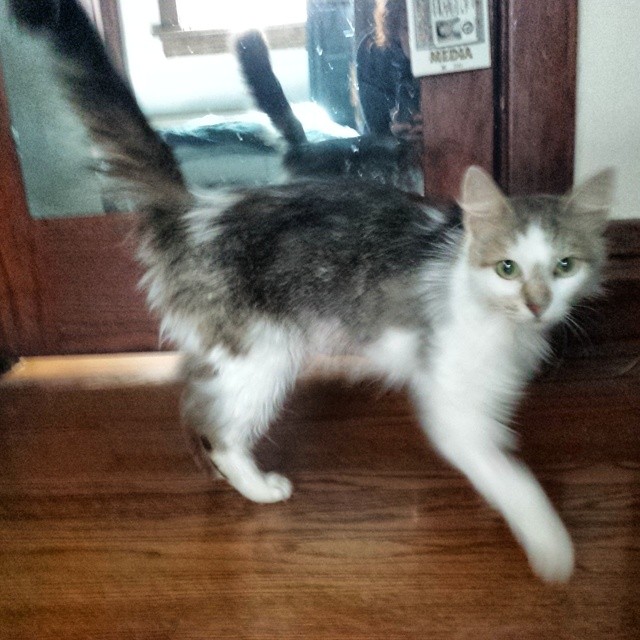 She had been dropped off at the pound with newborn kittens. CARF pulled her out and placed her in foster care. They focus on animals in critical need and pulled our lady and her kittens because one was dead in the cage with her. She was apparently a very affectionate mother, and raised her five kittens plus an orphan in foster care. Anyway, the kittens are weened and she was ready to be placed.

So far, I can tell you that she’s very affectionate, has tiny little vocalizations, and looooooooves being brushed.  As in, she will lie down and air-knead while you are working on her. Her fur is a little scraggly because she’s had a rough go, but I think she’ll bounce back quickly.

She and Marlowe have seen each other, but not been allowed in the same room together yet. They both are curious, but we want to give her time to feel more comfortable with the space before tossing a giant at her.

Names in the running so far:

Note: You don’t get a vote about the name of the new cat, but we’ll take nominations that the Kowal board will consider for review.

21 thoughts on “Meet our new cat, name to be determined”