Nancy Kress is joining us today to discuss her novel If Tomorrow Comes: Book 2 of the Yesterday’s Kin Trilogy. Here is the publisher’s description:

Ten years after the Aliens left Earth, humanity succeeds in building a ship, Friendship, to follow them home to Kindred. Aboard are a crew of scientists, diplomats, and a squad of Rangers to protect them. But when the Friendship arrives, they find nothing they expected. No interplanetary culture, no industrial base―and no cure for the spore disease.

A timeslip in the apparently instantaneous travel between worlds has occurred and far more than ten years have passed.

Once again scientists find themselves in a race against time to save humanity and their kind from a deadly virus while a clock of a different sort runs down on a military solution no less deadly to all. Amid devastation and plague come stories of heroism and sacrifice and of genetic destiny and free choice, with its implicit promise of conscious change. 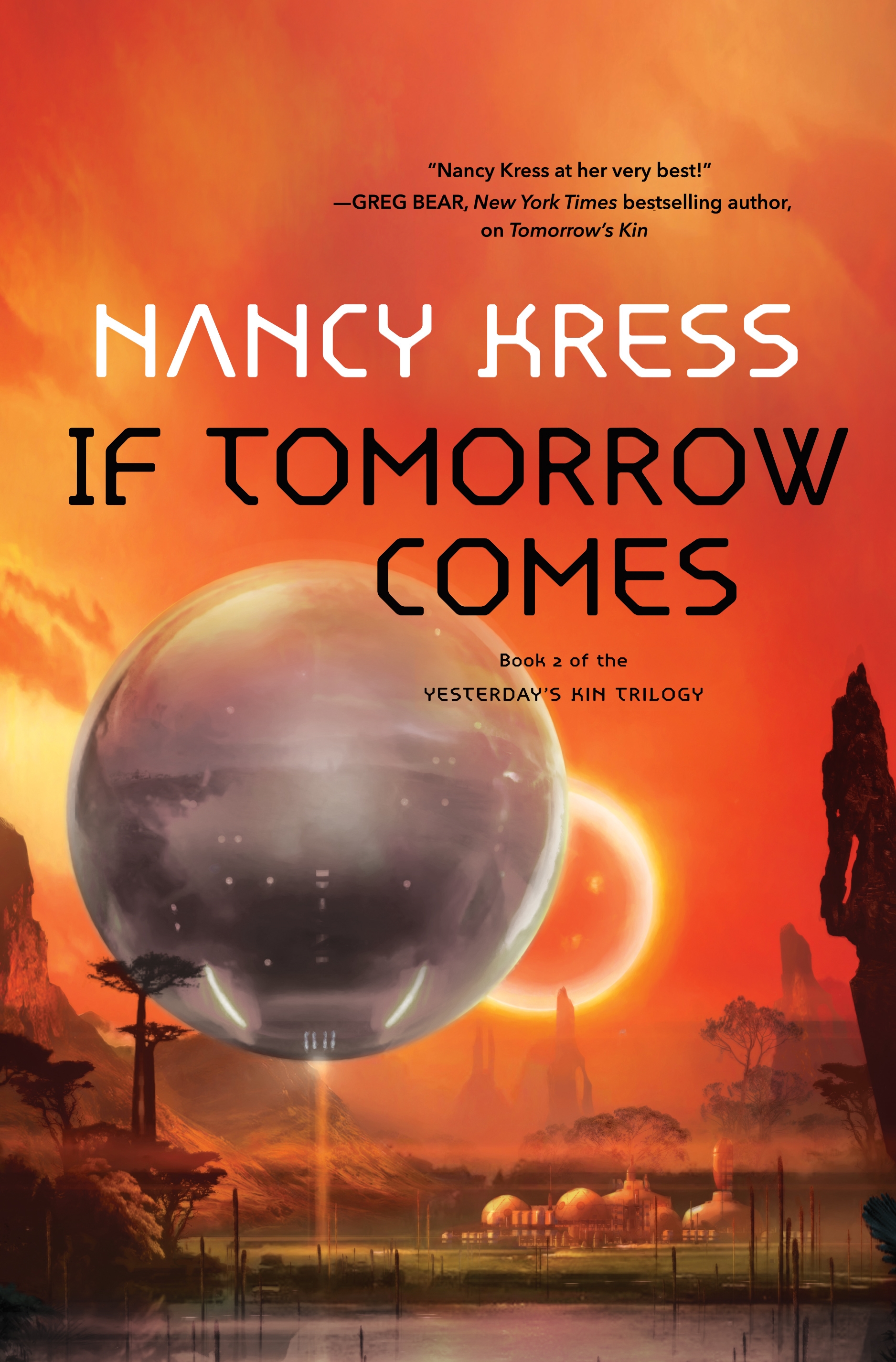 Adulthood is hard. Getting there can be even harder.

My new novel, If Tomorrow Comes, is the sequel to last year’s Tomorrow’s Kin. Both books have large casts and multiple points of view (and I’m going to stop doing that because it’s so complicated. Stop it soon. With the very next book. Maybe.) If Tomorrow Comes includes several U.S. Rangers, a middle-aged female geneticist, a physician who doesn’t understand his own life, a worldful of humans brought to an alien planet 170,000 years ago whose social evolution took a much different path from Earth, and nine humans who have lived on World for a decade. Among those is thirteen-year-old Austin.
To write Austin, I drew on my own memories of being thirteen. Memory was aided by a diary I kept then, an incredibly embarrassing artifact that no one is ever going to see.

Austin is confused without knowing it. He yearns to do something splendid, something that will make the adults he admires stand in awe of him. He has no judgment about which adults to admire, and often picks the wrong ones. He believes some of what he’s told, but not all of it-and because he chooses what to believe on the basis of whether he likes the speaker, he ends up with ideas that don’t always match reality. Girls attract and terrify him, and he gets inappropriate crushes. He struggles with grand ideas, trying to comprehend the universe, as in this passage:

Austin Rhinehart sat under a makfruit tree in the back garden and tried to imagine himself dead.

Everything would disappear, all of World. But then he would disappear, too, so how would he know he was dead? He wouldn’t. Unless Old Mother Kee^la’s tales of another world after death were true and Austin would join his ancestors in endless dancing and feasting. But Austin wasn’t fond of dancing, and he didn’t have any ancestors on World for his lahk, because everyone in it had come from Earth, a place Austin didn’t remember. He’d been only three. Anyway, he didn’t believe Old Mother Kee^la’s tales. She wasn’t even his old Mother, only Graa^lok’s; Austin’s lahk was also missing old mothers.

And he wasn’t going to be dead. He was Terran, and thus immune to spore disease. But everyone else was going to be dead: his best friend Graa^lok and Old Mother Kee^la’ and the teachers at school and Tiklal, whom Austin was supposed to apprentice to when he turned fourteen in two months. Only by that time, Tiklal would be dead, along with nearly everyone else on World.

Steven-kal came down the curving steps from the house, mounted a bicycle, and glimpsed Austin. He said in English, “I greet you, Austin. Aren’t you supposed to be in school?”

“I greet you, Steven-kal. I was just going.”

Steven-kal looked pointedly at his watch. “You are supposed to be there.”

“See that you do.” He mounted his bicycle and pedaled off.

Fuck! Austin thought, borrowing a forbidden word from his mother’s vocabulary…. Austin hated all of them-not because they were unkind to him but because they had responsibility for him for another three years and nobody recognized that he, Austin, was already an adult and able to make his own decisions.

Well, they would learn that soon enough!

He smacked one fist into the opposite palm, which felt good so he did it again.

Austin is a mass of contradictions: prickly, smart, disdainful, heroic, childish one minute and mature the next. In short, he is like a lot of us were at thirteen.

In short, he is like a lot of us are now.

But unlike most of us, Austin’s choices and actions affect the fate of an entire planet, which is a lot to ask of a thirteen-year-old. World is about to encounter the spore cloud that, drifting through the galaxy, menaced Earth in Tomorrow’s Kin. The adults around him are working frantically, often at cross purposes, to prepare for that disaster. Austin, teaming up with the wrong people, has his own agenda to “help,” which puts him at cross-purposes with the cross-purposes.

Growing up isn’t usually this hard. However, both Austin’s situation and his personality made him a lot of fun to write. And when I finished the book, I actually missed him.

Excerpt of If Tomorrow Comes

Nancy Kress is the author of thirty-three books, including twenty-six novels, four collections of short stories, and three books on writing.  Her work has won six Nebulas, two Hugos, a Sturgeon, and the John W. Campbell Memorial Award.  Most recent works are Tomorrow’s Kin (Tor, 2017) and its sequel, If Tomorrow Comes (Tor, 2018).  Kress’s work has been translated into Swedish, Danish, French, Italian, German, Spanish, Polish, Croatian, Chinese, Lithuanian, Romanian, Japanese, Korean, Hebrew, Russian, and Klingon, none of which she can read.  In addition to writing, Kress often teaches at various venues around the country and abroad, including a semester as guest lecturer at the University of Leipzig, an intensive workshop in Beijing, and the annual two-week workshop Taos Toolbox, which she teaches with Walter Jon Williams.  Kress lives in Seattle with her husband, writer Jack Skillingstead, and Cosette, the world’s most spoiled toy poodle.