Matthew Johnson is joining us today with his book Irregular Verbs and Other Stories. Here’s the publisher’s description.

keluarga: to move to a new village

lunak: to search for something without finding it

mencintai: to love for the last time

Meet a guilt-ridden nurse who atones for her sins by joining her zombified patients in exile; a lone soldier standing guard on a desolate Arctic island against an invasion that may be all in his mind; a folksinger who tries to unionize Hell; and a private eye who only takes your case after you die. Visit a resettlement centre for refugees from ancient Rome; a lost country recreated by its last citizen on the Internet; and a restaurant where the owner’s ghost lingers for one final party. Discover the inflationary effects of a dragon’s hoard, the secret connection between Mark Twain and Frankenstein, and the magic power of blackberry jam—all in this debut collection of strange, funny, and bittersweet tales. 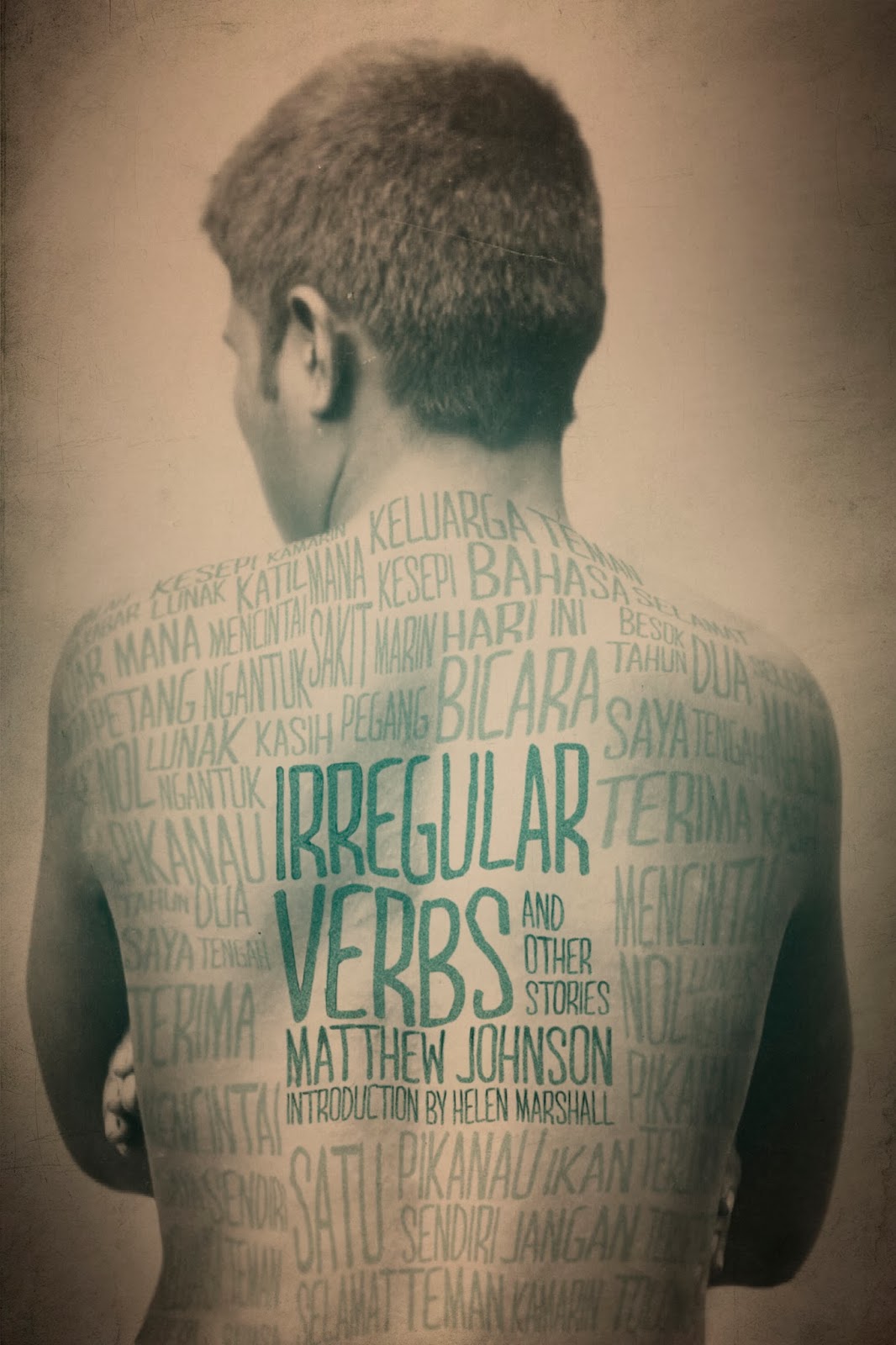 It was hard for me to think of a favorite bit from Irregular Verbs and Other Stories. Partly that’s because it’s a collection of short stories, rather than a novel: each story has favorite bits in it, images or characters or even just words that I loved enough to get me to write the story down and submit it (and, more often than not, to resubmit it, and resubmit, and resubmit…) But as I thought about it, I realized that there was another reason as well: in most of the stories, my favourite bits were the things I didn’t write.

To explain that, I have to talk about the iceberg.

I’m a firm believer in the “iceberg” theory of writing: that what the reader sees should only be a tiny sliver of the whole world of the story, the tip of the iceberg. I think this is true of all fiction, but it’s especially true of fantasy and SF because these genres depend so heavily on engaging the reader’s imagination. It’s a paradox: the more details you provide about the world of your story, the smaller it becomes in the reader’s mind. But the more you give hints, rumors, offhand remarks and unexplained allusions… Think of all those wonderful lines in the original Star Wars: It’s the ship that made the Kessel Spice run in less than twelve parsecs. The Jedi are extinct, their fire gone out of the universe. You served with my father in the Clone Wars. How much more intriguing were they for not being explained, for raising questions that went unanswered? Did any of the answers we eventually did get compare with what the ones we imagined by ourselves?

To make that iceberg, a writer has to do two things. The first is to actually create most of the underwater part: I could, for example, explain to you exactly the series of events that led to the alternate version of New Orleans in “Public Safety” – a story actually originated from a morning spent explaining some of the more absurd aspects of the French Revolution to a high school history class – but I restrained myself to hints: a statue of the Goddess of Reason, a bust of Jacques Hebert, and hours and months divided into tens instead of twelves. “The Dragon’s Lesson” portrays two cultures, that of the story’s teller and that of the story being told, but both are largely implied by the proverbs the characters use: “Even a lion feels the bite of a fly”; “Passed water is good as beer in the desert”; “Better to be a fox in the grass than a dog by the fire, as our men say.”

The flip side of that is that you have to leave some of the iceberg unmade, leave blank spots on the map whose contents even you don’t know. Sometimes, as in the title story in the collection, that means describing a marriage in just a few words: “An afternoon spent in a palm-tree shadow is long enough for two people to fall in love, a few moments enough to die at sea.” That’s nearly all we ever learn – and all I know — about Sendiri Ang’s wife Kesepi, and their life together that inspired the language they alone shared; but it’s enough to understand why Sendiri is so determined to preserve that language, to keep it alive even after she dies. As John M. Ford put it in From the End of the Twentieth Century, “If I told you, you would know less than you do now.”

And so it goes. The stories I like best in Irregular Verbs are the irregular ones, the unfinished ones: those whose characters go unnamed; those that take place in focus on the bit players in a vast, vaguely-glimpsed epic; those that narrow down to two possible endings but refuse to settle on one. The ones that invite you, even when the story is over, to keep dreaming.

Matthew Johnson has published stories in places such as Asimov’s Science Fiction, The Magazine of Fantasy & Science Fiction and Strange Horizons and has published one novel, Fall From Earth, from Bundoran Press. His work has been collected in several Year’s Best anthologies and has been translated into Danish, Czech and Russian. While not writing or engaged in full-contact parenting he works as the Director of Education for MediaSmarts, an internationally known non-profit source of digital and media literacy resources where he writes lessons and blogs, designs award-winning educational games and occasionally does pirate voices in both English and French.