Since being court-martialed by the Star Empire, smuggler and thief Joan Shengtu has done what she needed to do in order to survive—gaining a reputation along the way. When a new client’s mission goes sideways, Joan finds herself caught in the middle of dueling gambits between the Star Empire and the Trade Federation. Recruited to perform the heist of a lifetime, the fate of the Star Empire rests in her hands.

On the opposite side of the galaxy, Regency BioTech manager Dario Anazao sees an unsustainable situation brewing that promises a full-scale revolution. The megacorporations of the Trade Federation have kept the population in horrible working conditions, violating their human rights. With no one else to help, Dario must take it upon himself to rescue the workers of Mars.

Can two heroes from warring factions come together to make a difference in the galaxy?

Star Realms: Rescue Run is the first novelization of the critically acclaimed Star Realms spaceship combat deckbuilding game. You can check out the game here: http://www.starrealms.com. 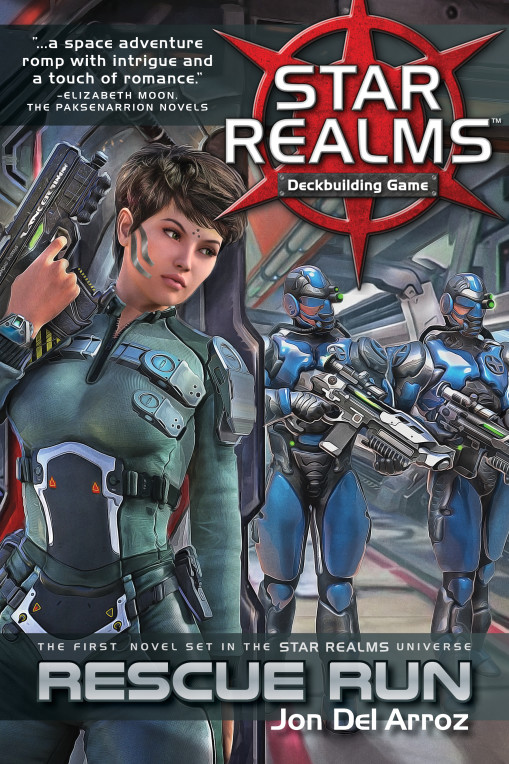 The balcony had a holoprojected view of the Martian landscape, including the Arsia Mons mountain. The oxygen level must have been pumped in higher in that receptacle, a closed room despite the open-air appearance. None of that surprised Dario. What did was the woman he saw standing there, gazing out over the balcony. With dinner about to be served, he’d expected to have some time alone here.

She turned to look at him, big brown eyes piercing through him, making him shiver. She wore an expensive dress. Dario didn’t know too much about fashion design, sticking to more conservative business attire, but color-changing fabric like she had on couldn’t come cheap. This woman was here to make a show. “I’m sorry, I didn’t mean to disturb,” Dario said, carefully taking a step back.

The woman smiled at him, pearly teeth exposed from her red lips. “No, you’re not interrupting. I just needed some fresh—” she stopped herself, shaking her head with a laugh. “It almost feels real, until you think about it. You know?” – Star Realms: Rescue Run

Star Realms at its core is a game about bases and battleships, massive fleets endlessly propelling at each other in an attempt to dominate galactic authority. When I wrote Rescue Run, the first novel in the Star Realms universe, I kept myself aware of that, but I wanted to focus on what it meant to be a human in such a chaotic universe.

My favorite bit of this book doesn’t come in the fight scenes, or even the gambits or missions that the various factions within the universe, but from the excerpt here, in which the two protagonists from two very different walks of life meet for the first time, and realize that they have something in common as people. These human moments are what matter most in our lives, and so the human moments are also what have the most impact in my story.

Another sub-theme that I layered into Rescue Run is one that technology presents illusions that give us comfort, but not substance. The Star Empire and Trade Federation are manipulating people’s psyches as much as they’re pushing for control of different areas of the galaxies. Characters are decked out with body modifications that control aspects of their lives down to their hearing and vision. They’re trapped in bases and starships, never seeing reality beyond what’s been constructed for them by their empires or corporations. This scene highlights the doctored perception of reality, as the main protagonists of the story are staring at a phony landscape of Mars that’s projected in front of them on a wall. The real landscape of Mars is just below the station where they’re at, but the powers that be don’t want people looking in at the desperate lives of the helpless and poor that they’ve built their fortunes on: they want to create a space where people are comfortable enough that they wouldn’t dare upset the careful balance the corporations had created.

It’s my opinion that in our own lives in 2016, we’re falling down a slippery slope of a path similar to what’s presented in Rescue Run. We’re connected to the internet all the time, staring down at our smart phones, never looking up at reality anymore. We’re outraged about what we’re told to be outraged about in less than 140 characters. We’re similarly content and safe in not taking active roles in the real world because we never have to look up and see another person.  It creates a dangerous environment in a lot of ways, because when we forget that there are real people on the other side of screens or even on the other side of the street, we lose compassion, which I believe to be a cardinal virtue.

Though analyzing this section of Star Realms: Rescue Run shows some heavy concepts, I did try to keep the book in the spirit of the fact that it’s based on a game. For the most part, the novel is fast-paced. There’s plenty of action, adventure, and intrigue, with a healthy bit of romance sprinkled in for good measure.

For those who aren’t familiar with the Star Realms Deckbuilding Game, it’s a free app, and it’s very easy to learn. I did my best to make the book so you don’t have to have played the game to understand the story, so it should be enjoyable to those who like space opera or a good adventure book. There are plenty of fun references to the game layered in for those who are familiar, but to me, it’s the people who matter. That includes my characters Joan and Dario, Star Realms opponents on the app, or anyone I come across in life. It pays to remember we’re not the only souls in the vastness of space.

Jon Del Arroz began his writing career in high school, providing book reviews and the occasional article for the local news magazine, The Valley Citizen. From there, he went on to write a weekly web comic, Flying Sparks, which has been hailed by Comic Book Resources as “the kind of stuff that made me fall in love with early Marvel comics.” He has several published short stories, most recently providing flash fiction for AEG’s weird west card game, Doomtown: Reloaded, and a micro-setting for the Tiny Frontiers RPG. Star Realms: Rescue Run is his debut novel. You can find him during baseball season with his family at about half of the Oakland A’s home games in section 124.