Elizabeth Bonesteel is joining us today with her novel Breach of Containment. Here’s the publisher’s description:

A reluctant hero must prevent war in space and on Earth in this fast-paced military science fiction thriller from the author of The Cold Between and Remnants of Trust—a page-turning hybrid combining the gritty, high-octane thrills of James S. A. Corey and the sociopolitical drama of Ann Leckie.

Space is full of the unknown . . . most of it ready to kill you.

When hostilities between factions threaten to explode into a shooting war on the moon of Yakutsk, the two major galactic military powers, Central Corps and PSI, send ships to defuse the situation. But when a strange artifact is discovered, events are set in motion that threaten the entire colonized galaxy—including former Central Corps Commander Elena Shaw.

Now an engineer on a commercial shipping vessel, Elena finds herself drawn into the conflict when she picks up the artifact on Yakutsk—and investigation of it uncovers ties to the massive, corrupt corporation Ellis Systems, whom she’s opposed before. Her safety is further compromised by her former ties to Central Corps—Elena can’t separate herself from her past life and her old ship, the CCSS Galileo.

Before Elena can pursue the artifact’s purpose further, disaster strikes: all communication with the First Sector—including Earth—is lost. The reason becomes apparent when news reaches Elena of a battle fleet, intent on destruction, rapidly approaching Earth. And with communications at sublight levels, there is no way to warn the planet in time.

Armed with crucial intel from a shadowy source and the strange artifact, Elena may be the only one who can stop the fleet, and Ellis, and save Earth. But for this mission there will be no second chances—and no return. 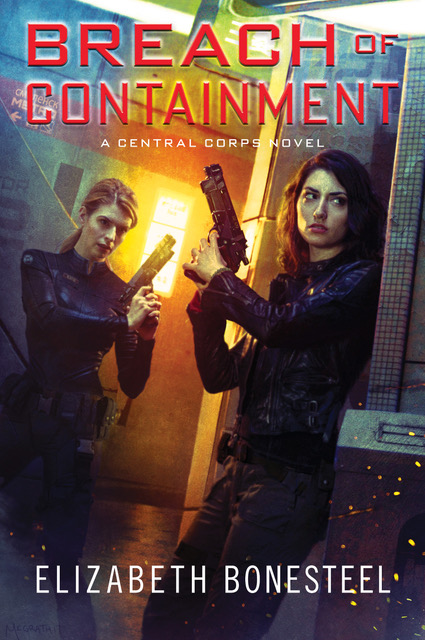 Mysteries have made me a prologue addict.

Despite writing science fiction, I spent a lot of the 90s and 00s reading mysteries. Prologues aren’t an unusual ingredient in the mystery genre: a brief scene at the start, maybe from the killer’s perspective, maybe of some significant event that happened weeks or years or centuries earlier. A good mystery prologue provides intrigue you can’t ignore, and makes you keep reading to find out how the events of the prologue illuminate the rest of the story.

I tend to use prologues for inciting incidents that don’t look like inciting incidents. The prologue isn’t the Big Bang that kicks the story into gear. It’s an event, sometimes small, sometimes large, that renders the remainder of the story inevitable. It’s the point when the safety bar comes down on the roller coaster, and even though the riders can’t see the track ahead, they’re stuck following it to the end.

In BREACH OF CONTAINMENT, I write about a box.

Not just a box, of course. I also write about Yakutsk, a small, cold moon, where much of the story’s action takes place. I write about Dallas, a seasoned parts scavenger, who is mostly contented with life on Yakutsk, but can’t ignore their nagging unease about the small, nondescript, not-quite-inert box found on the surface. I write about Jamyung, a scrap dealer, who recognizes the monetary value in the oddity but is deeply incurious about the oddity itself.

(Spoiler: Jamyung should have been less incurious.)

My first two books had elements of traditional whodunnits (although my villains are villainous enough I don’t think the reveal is ever much of a surprise). BREACH OF CONTAINMENT has a central mystery, but it’s not about who’s behind the various events of the story. We know who’s doing what. The mystery is what’s actually going on: why these events are happening now, how they’re related, why some characters are making the choices they’re making.

All of this makes it really, really hard to talk spoiler-free about the plot, which is kind of an important thing to be able to do when you’re trying to do promotion. I’m sure I’m not the first author who’s discovered that their real Favorite Bit is a massive spoiler and they can’t talk about it at all. I can’t even tell you what the deal is with Jamyung’s box.

(Here’s a non-spoiler part of the deal: I have a thing about squares, and that weird little box is designed to be exactly the kind of knick-knack I like to have around my house. My family, on the other hand, would stare at it, puzzled, wondering what charms I was seeing that they were missing. Beauty is subjective.)

I can say that this prologue is a microcosm of the whole story: Dallas’s affection for Yakutsk, Martine’s instant attraction to the Box of Doom, Jamyung’s eye for profit over aesthetics (and also safety).

And the cold. There’s a lot of cold in this book. I am fascinated by cold but I wouldn’t choose to live in it (insert New England winter joke here). I didn’t realize until the story was finished how much cold plays into everything in this book.

But so does warmth, in all its forms. The box is warm, even after sitting exposed on the sunless surface of a nearly airless moon. Martine’s attraction to the object makes her carry it inside the domed city. Empathy for Martine draws Dallas out of a comfortably solitary existence to investigate why life on Yakutsk is changing in so many unsettling ways. Yakutsk’s people are insular, businesslike, and often violent; but despite living in a culture that’s always one bar fight away from civil war, they share deep affection for their icy little moon.

And that matters. Soon enough? Depends on your perspective. But it matters.

Prologues engender a tremendous amount of hate. We all know why; I won’t regurgitate the usual schools of thought on the subject. My own inclusion of prologues may have as much to do with my love of film as my wide reading of mysteries; they often work well on screen. (Best prologue anywhere, ever: RAISING ARIZONA. Eleven minutes, riveting, and absolutely critical to the story.)

As with many aspects of my writing, I don’t always see the significance until the whole story is finished. For whatever reason, everything important always seems to end up in the prologue. Not the plot details, of course, or the whodunit or even the whydunnit, but the theme, the motivation, the moral center. (Be fair, my moral centers are generally some variant of “be kind to each other” because really, what else is there?)

So I should stop worrying about including spoilers when promoting BREACH OF CONTAINMENT. It’s all there, in the prologue, everything you need to know. (But do, if you like the prologue, consider reading the rest as well. Because a box is never just a box, is it?)