Diana Renn joins us today to talk about Season 1 of the serial fiction False Idols. Here’s the series description:

FBI Linguist Layla el-Deeb is deep undercover posing as an heiress in the Middle East. She must infiltrate the highest echelons of society in order to trace priceless relics from their millionaire owners back to illegal digs and the terrorist groups profiting from their sale.

But Layla’s troubled past and growing feelings for an art dealer’s son begin to complicate her judgment, and when she uncovers a terrorist plot that threatens American and Egyptian lives she must decide where her loyalties truly lie. 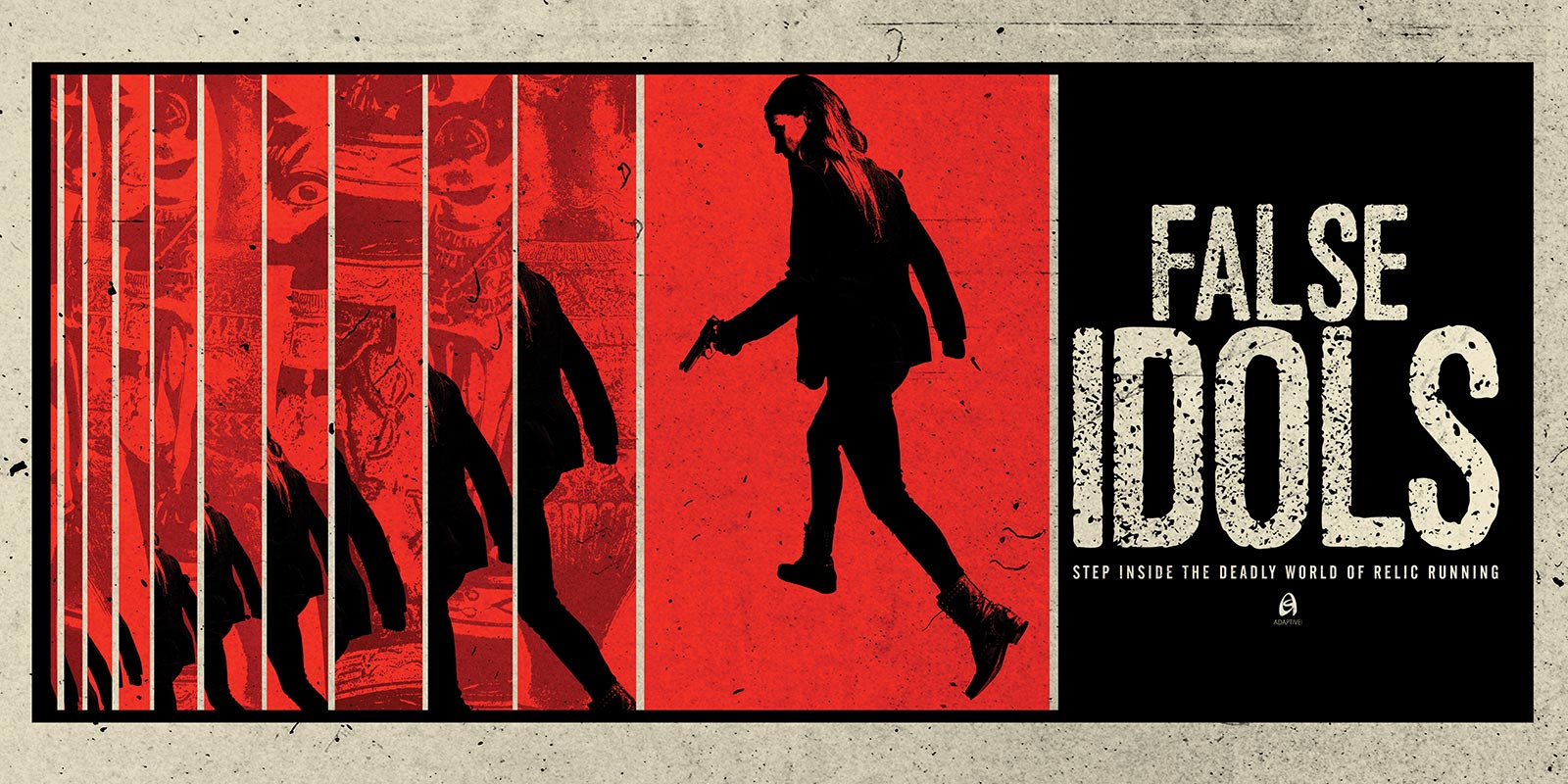 As a collaboratively written, serialized story spanning eleven “episodes,” False Idols features a formidable cast of characters. Our heroine, Egyptian-born FBI agent Layla el-Deeb, along with her mentor, Special Agent Ellen Pierce (head of the FBI Art Crimes unit) follow the money trail in Cairo, Egypt, to investigate how illicitly sold antiquities finance terrorism, and to protect the U.S. from an imminent attack.

The scale of the crime required a large group of suspects. So on the character front, False Idols has it all – more than enough to fill the stage of a Broadway musical! Going undercover as an art-collecting heiress in Cairo, the city she once called home, Layla meets eccentric international art collectors, shady antiquities dealers, shadowy middlemen, and terrorist insiders. She becomes entangled with a brilliant American art restorer who steals her heart. She befriends an Italian journalist who is desperate to keep stories about archaeological lootings from being buried in the news, and who shares her values of truth and justice. She plays a high-stakes cat and mouse game with a high-ranking Egyptian government official. She reports to Agent Pierce, a seasoned FBI agent who has a chip on her shoulder and a dark secret. She reconnects with her estranged family, putting the entire operation at risk. And she interacts with a rousing chorus of other FBI agents, Egyptian and American embassy workers, political activists, protestors, organized crime thugs, and a slick crowd of jet-setting twenty-something party kids, whom she somehow manages to convince to accept her into their circle.

Out of this enormous cast, though, I am most proud of Layla – both her unconventional story, and the unique way she came into being.

Writing Layla marked a departure for me as a mystery writer. My previous novels were written for young adults. My globetrotting, mystery-solving teens were amateur sleuths, by virtue of their age. They encountered everything for the first time – not just crimes, but different cultures, love and loss, and their own hidden reservoirs of strengths. Teen sleuths were fun, but I felt ready to flex my mystery-writing muscles and try my hand at a different type of detective.

Layla is no starry-eyed ingénue. She’s pushing thirty and asking herself questions about what the next chapter of her life might look like. She’s led a completely unconventional life so far; will she find someone who will accept the complexities of her identity? Can she trust anyone? And while this is her first undercover gig, she is a trained FBI agent who’s kicked down a few doors. Layla also grew up in one of Cairo’s poorest neighborhoods -within a stone’s throw of the penthouse apartment where she resides in her undercover role. She’s worked incredibly hard to leave her family, get an education, and become a U.S. citizen and an FBI agent.

The other layer of complexity to Layla is her undercover life. As she tries to penetrate deeper into the world of antiquities collectors and dealers, she must be cautious about what she reveals to people. Yet even her “true” identity – competent, self-sufficient FBI agent- is another type of cover, layered over the vulnerable girl who grew up in a Cairo slum. Complicating matters are her growing feelings for James, the son of an art dealer she’s investigating, and her affection for the dealer himself, who comes to see her as family. It’s exhausting work, keeping the lies in check and not revealing too much – even as Layla tries to deepen connections with people she’s come to care for.

Part of Layla’s work involves looking closely at the provenance of valuable artifacts, trying to determine their authenticity, their point of origin, and the times that they have changed owners. Her radar is always up for fakes and flaws, the story of a relic that doesn’t make sense or that might point to illicit deals. In the process, she becomes more aware of her own provenance, and the fact that her story is not without cracks.

The creation of any fictional character is always a little mysterious, yet with characters in my other books, I can always point to a point of origin, the original inspiration. A stranger’s face, an overheard conversation, a figure from my own past. Over subsequent drafts, I round characters out, plumb their psychological depths, and come to know them -ideally, to inhabit them.

Layla was different. Who dreamed her up originally? Who or what inspired her? I do not actually know. When our author team signed on for this project back in 2016, we were handed a great gift from Adaptive Studios and Serial Box: the beginning of a character named Layla, and the premise for an exciting story. Our showrunner, Lisa Klink, fleshed out Layla further when she wrote the Story Bible. Then Lisa, our other co-author Patrick Lohier, and I – in consultation with the creative folks at Serial Box and Adaptive – brainstormed further. At our story summit meeting in Los Angeles in November 2016, our team spent three days in a writer’s room to plan the False Idols characters, episodes, and overall plot. In the writer’s room, Layla began to have a life, a back story, and a character arc, which we traced on numerous sticky notes that eventually filled a wall. 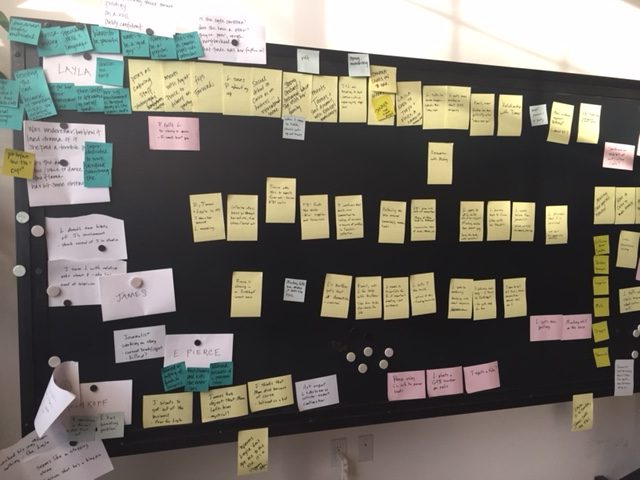 Over the ensuing months, we wrote our individual episodes, critiqued each other’s work, brainstormed again, and – with the aid of our amazing editors Molly Barton and Lydia Shamah – we endlessly revised. It was through that collaborative process, Layla came to life. Not from one individual writer.

I marvel at how we all agreed on her motives, her goals, and her character arc. I do not think the team every debated, at least not for long, what Layla would or would not do in any given situation. Her voice and personality are consistent across episodes. In writing Layla, handing her off from one episode to the next, it felt less like we were creating her than we were learning even more about her. I’m proud to have been one of many people who helped bring Layla to life and to tell her story.

Diana Renn is the author of three young adult mysteries featuring international intrigue and globetrotting teens: Tokyo Heist, Latitude Zero, and Blue Voyage, all published by Viking/Penguin. Blue Voyage was honored as a 2016 “must-read” by the Massachusetts Book Awards, and Latitude Zero was a Junior Library Guild selection. Her latest project is False Idols, a collaboratively-written, episodically-released thriller published in a partnership with Serial Box and Adaptive Books. Her essays and short fiction have appeared in Publisher’s Weekly, The Huffington Post, Brain Child, Literary Mama, The Writer, YARN (Young Adult Review Network), and others. Diana grew up in Seattle and now lives outside of Boston, Massachusetts with her husband, her son, and a moody black cat. Visit her online at www.dianarennbooks.com or @dianarenn on Twitter.