Anna Kashina is joining us today with her novel Assassin Queen. Here’s the publisher’s description:

Defeated by the Majat forces, Nimos and the other Kaddim Brothers retreat to their secret fortress in the southern mountains. Nimos knows that the Majat’s victory is only temporary: during the flight, he managed to place a mark on Kara, one of the top-ranked Diamond Majat. His mind magic would now allow him to use this mark to confer her fighting skill to the Kaddim warriors and turn her loyalties to their side.

The new Majat Guildmaster, Mai, is planning a march against the Kaddim. His key ally, Prince Kyth Dorn, is instrumental in these plans: Kyth’s magic gift can protect the Majat against the Kaddim mind control powers. But Mai and Kyth are having trouble getting over their rivalry for Kara’s affections–even after they realize that this rivalry is the least of their worries, at least for the moment. Something about Kara is not right… 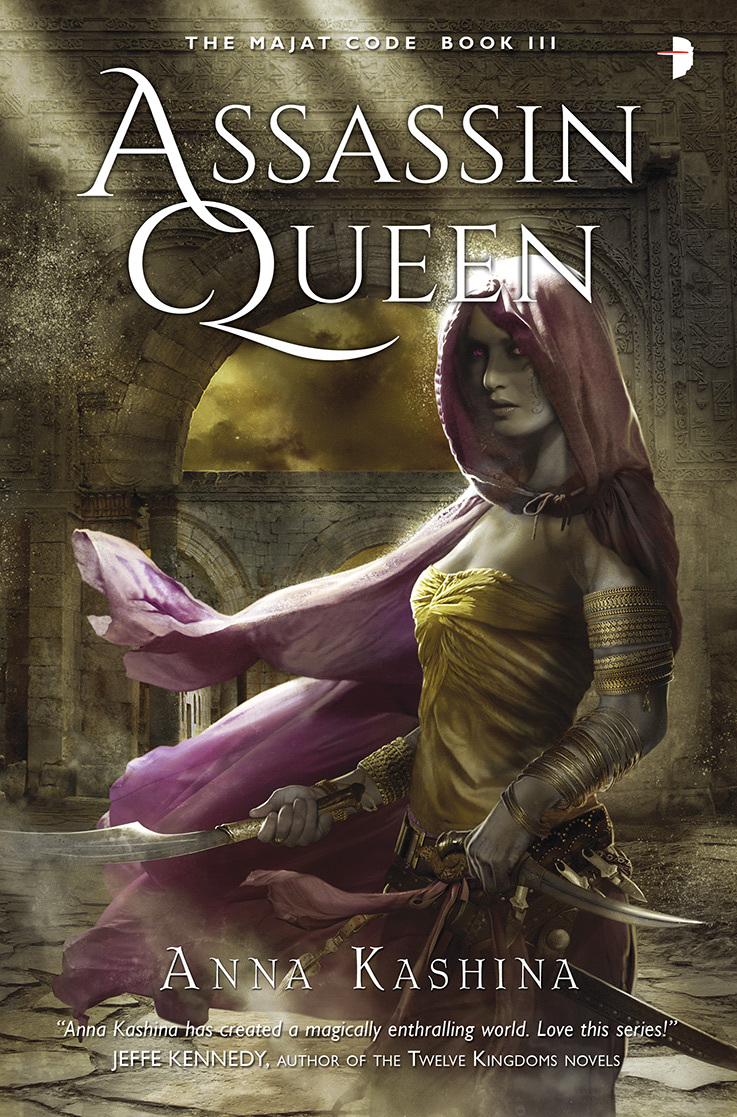 My favorite bit in writing “Assassin Queen” – and the whole “Majat Code” series — is the main character, Mai. It felt almost like a guilty pleasure to write about it. Is this even legitimate?

Mai is a Diamond-ranked warrior, so highly skilled that despite his young age he has become a legend in the Majat Guild. He first appeared in book 1 of the series, “Blades of the Old Empire”, where he was intended to appear only briefly, not that it ever worked out as planned. In that book, Kara, another Diamond-ranked Majat, violates her orders, triggering the Guild to send an assassin after her. Since up until that point Kara seems pretty much undefeatable, I needed this assassin to be dangerous enough to make the readers worry about the outcome. On the heels of that came the realization that this danger cannot be fully evoked unless this character is developed far beyond an ominous shadow figure wielding a blade. It took me a long time to come up with a person who would fit the bill.

Once I worked out the big picture, everything else started clicking into place, including his looks, personality – even his name. Opposite to the stereotypes, he looks slim and delicate, boyish. When he first appears, he is described as more fit to carry a lyre than a sword. Yet, he also emanates subtle threat, and the reason for it becomes obvious as soon as he starts fighting and we see both his competency and the brutal force he is capable of.

Mai is built through contrasts, and when all these contrasts formed in my head, his image popped out and immediately became dimensional. I could always see him in my mind, beyond the details I chose to describe. It became even more exciting when he started talking – and saying things I absolutely did not expect him to say. Any time a character wanted to have a conversation with Mai, all I needed to do was set up the situation and the topic and then let Mai do all the talking. Literally. By Book 2 in the series, “The Guild of Assassins” I began to think of writing as “watching” and I could not wait to get back to it. Now, having written the conclusion of the series, I think back on it with a mix of enjoyment and regret. I love the way the series turned out. And, I am sad I am not writing it any more.

In Book 1 Mai remained a secondary character, even if with a much bigger role in the story than I originally planned. By Book 2 he stepped decisively to the front – can you imagine my thrill when my publisher chose to feature him on the cover? Book 3 all revolves around him, and the choices he must make to save the world. I credit Mai with the way the story stayed so seamlessly together, integrating several major point of view characters into one fast-moving plot line. I also credit him for the fact book 2 won two Prism Awards last year, both the “Best in Fantasy” and the “Best of the Best” grand prize, both given for speculative fiction with elements of romance.

I found it curious that despite how focused on Mai I was, how much I was looking forward to seeing him every time I wrote the Majat Code series, I still found it unnatural to use his point of view. He is shown entirely through the eyes of others, who love and admire him–or on occasions hate him and find him annoying. This blend was fun too, reflecting all the contrasts and dimensions of his personality in a way that also makes perfect sense all around.

But the most rewarding of all was to see the same reaction to Mai in many of my readers and fans. Evoking this response, finding the like-minded people who enjoy the same things about my books that I do – this is really my favorite bit!

Anna Kashina grew up in Russia and moved to the United States after receiving her Ph.D. in cell biology from the Russian Academy of Sciences. She works as a biomedical researcher and combines career in science with her passion for writing.

Anna’s interests in ballroom dancing, world mythologies and folklore feed her high-level interest in martial arts of the Majat warriors. She lives in Philadelphia, Pennsylvania.