Ainy Rainwater is joining us today with her novel If Wishes Were Spaceships. Here’s the publisher’s description:

When Jazlyn is forced to make an emergency landing on a quarantine planet, the worst she expects to find are a bunch of irate scientists complaining because she messed up the pristine conditions of some experiment. But the buildings look like works of art and the inhabitants are a wealthy scion of a galactic dynasty and an anxious techie. While the compound has all the comforts of home, it has none of the basic hospitality she expects. Cut off from all communication, surrounded by a thicket of dangerous carnivorous plants, Jazlyn must find a way to repair her ship — if possible — or hope that her friends find her distress beacon before Sterneworth, the planet’s resident tyrant, does something drastic. Can she trust Blaine, the techie who is completely under Sterneworth’s thumb, and who desperately wants off the planet by any means? Jazlyn has never been one to knuckle under or buckle under pressure. Nor is finesse is one of her skills. She will tackle the problems — the ship repair, the bizarre plants, and the duplicitous inhabitants of the planet — head on. Has the sassy spacer who’s used to getting her way met her match in the power and might of the Sterneworth dynasty? Everyone on the planet has a secret agenda. She has a ship to repair… 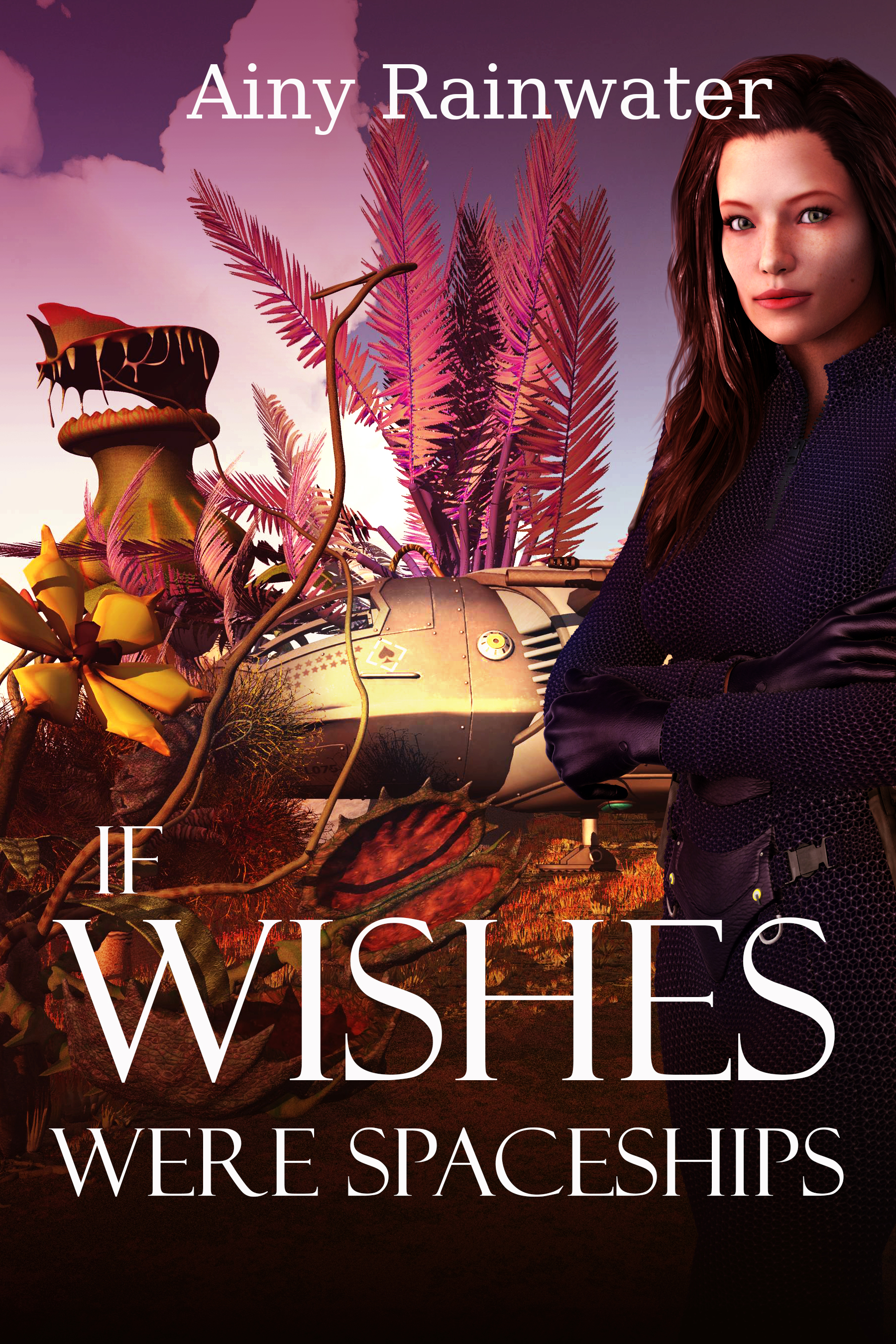 It was tough to choose a favorite bit because this novel was so much fun to write. I wanted to do a fun novel for friends and fans who have been waiting so patiently while I work on a fantasy series. My idea was an ol’ fashioned adventure tale of someone stranded on a planet with giant carnivorous plants, but I didn’t want to do a book with a heavily retro feel. I wanted a confident female protagonist who pushed back when she was pushed. Enter Jazlyn….

I love a lot of things about this book, but I keep coming back to the characters, especially Jazlyn. She’s who we want to be when things go wrong. She’s competent and confident. She absolutely will not let anyone step on her for any reason. Whatever happens she just keeps moving forward. No matter what’s thrown at her, she thinks she can handle it. It doesn’t mean that she doesn’t get angry or frustrated, but she has a wry sense of humor and isn’t easily deflected from her objectives.

Up to this point, she’s had a fairly good life. She’s used to things going her way because she has the confidence and skill set — as well as business partners who are friends — to ensure that her life is as good as she can make it. That, as it turns out, is something of a problem. She’s not used to facing situations that are totally out of her control. She’s used to getting her way.

The problem is that Sterneworth, who owns the planet she had to ditch on, is the scion of a wealthy dynastic family and he, too, is used to getting his own way. Neither he nor Jazlyn have the best “people skills”. Jazlyn tends to push rather than negotiate. She has partners with different personal styles; one of her partners is a good negotiator, and the other “skates by on charm”. But she can’t call on their skill set in this situation. In fact, she can’t call at all since Sterneworth controls the comms.

“Let me ask you something,” she began. “Do you want me to stay on this planet, right here, annoying you day and night and disrupting the routine of your life, or do you want me gone, the sooner the better? Because if you regard me as a problem or a nuisance, as I have every reason to think you do, then the absolute best thing you can do to return to the status quo — whatever that is around here — is to let Blaine give me a hand running diagnostics and helping with repairs. Unless you want to let me use your comm system to contact my people to come and pick me up. For some reason Blaine is under the impression that this perfectly reasonable action — using the general comm — is impossible. I’d like to know why. I’d also like to get just a tiny bit of help, no more than any reasonable human being would expect to be given. No more than any reasonable human being would give. Now, are you going to be reasonable or am I going to have to shanghai Blaine and hijack the comm?”

I needed the language in that paragraph to be blunt and inflammatory. I do use some 20th century idioms in the book to give some bits of dialogue a brash colloquial feel. Idiomatic English many centuries in the future would be largely incomprehensible to readers today, so I chose to use a limited amount of future-speak, mixed with more contemporary language for maximum impact.

The book is very much a battle of wills between two people with opposing agendas, who really can’t understand each other. Caught between Sterneworth and Jazlyn is the frightened techie, Blaine. Like Jazlyn, I sort of despised Blaine at the beginning of the book, but he grew on me. Blaine makes Jazlyn stop and think of someone other than herself and her own problems. Jazlyn gives Blaine perspective on the trajectory of his life. Unfortunately Blaine needs more than just a fresh perspective. He needs Jazlyn’s ship.

Sometimes life is complicated and bad things happen. We all want to be confident and unflappable when things in our life spin out of control. We want to be like Jazlyn. Sometimes, though, people’s lives gradually slip away from what they had envisioned for themselves and, like Blaine, they realize that as scary as it is to take risks, nothing will change unless they do.

What of Sterneworth, the resident tyrant? I can’t say that I like him, but he was an interesting character to write. Sterneworth is a bundle of contradictory desires, a volatile mix of power and vulnerability, and driven as much by fear as arrogance. The skill set of a galactic bully is not helpful in this situation, and when things go wrong he has only himself to blame.

My favorite bit? The way the characters interact and react to their individual circumstances on this unusual and challenging planet. Jazlyn is a catalyst. She upsets the status quo. Both Sterneworth and Blaine are forced to reevaluate their positions simply because she landed there. Jazlyn’s ship is at the center of everything; all that the characters want — or don’t want — is tied up in that ship. If wishes were spaceships, then beggars might ride…

If Wishes Were Spaceships is available from: Amazon US, Barnes & Noble, iTunes, Smashwords, Kobo

Websites: Gymshoes Music, her official musician website; The Usual Suspects, a group food blog she contributes to; The Mighty Microblog, a miscellany, and A Truant Disposition, which is Ainy Rainwater’s official author site.

Ainy Rainwater has been writing and publishing short stories, essays, and novels in various genres for about 30 years. She lives in the greater Houston area with her husband and rescue dogs. She enjoys reading, writing, playing guitar and percussion, gardening, knitting, tea, baking and other kitchen improvisations, daydreaming, and wasting time online.

She is also known for the digital pop which she makes under the name Gymshoes. “Everest Sunrise” was featured in the documentary What It Takes. After hurricanes Katrina and Rita she released the EP, A Tropical Depression, the profits of which go to benefit the American Red Cross. Gymshoes albums are available from online stores.

Currently she’s working on a chick lit fantasy series as well as a sequel to If Wishes Were Spaceships.