This is the last interview of the 2009 nominees for the John W. Campbell Award for Best New Writer. I encourage you to find fiction by all of these authors and read them. 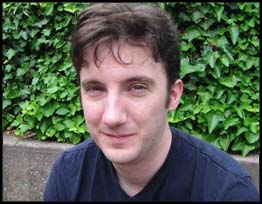 Felix Gilman was born in London in 1974. He holds two degrees in history from Oxford, a J.D. from Harvard Law School, a doctorate in Ludology from the Waldzell School of the Order of Castalia, and certain advanced but curiously non-specific qualifications in modern American poetry from the National University of Zembla.

Also he went to Hogwarts. Why not?

He now lives with his wife Sarah in New York, where he works as a writer and lawyer.

Please don’t ask him for legal advice. He’s not that sort of lawyer, and it doesn’t really work that way.

So what did you do when you were notified about the nomination?
I was on the phone when the email appeared. I wasn’t expecting to be nominated at all, and I hadn’t been paying particularly close attention to the process, so I was completely caught off-guard. I had to hang up and spend some time online trying to work out what being nominated meant in this context. Did it mean shortlisted or just voted for by one or more people? It took me about an hour to cautiously decide this was probably good news, and not in any apparent way a trap.

How long have you been writing?
The current sustained push has lasted since about late 2006.

Where did you get the idea for the great city of Ararat?
I don’t know exactly. I knew I wanted a city, and I knew I wanted it to be very big, and to feel (a) very strange and resistant to explanation and (b) suggestive of hidden depths, and so everything else followed from the premises. Details were stolen from every city I’ve ever been in or read about or seen on TV, and inserted as necessary as I went along.

In 2007, you did an interview with Jeff VanderMeer in which he asked you why you wrote. Among other things, you said, “Ask me again in a year.” Two years later…why do you write?
Bloody-mindedness.

Is there a definable point when you realized that writing had
changed from a hobby to an avocation?
“Hobby” will do just fine.

What projects are you working on now?
I’m due to get back edits from my editor at Tor on a third book, A History of The Half-Made World, any day now. Clearing the decks for that. It’s not related to the first two books.

What are you currently reading?
Norman Mailer’s Miami and the Siege of Chicago, about the 1968 Democratic and Republican conventions. I don’t know much about most of the figures involved, and 1968’s party politics are so remote and in so many ways inverted from today’s that I really don’t know what he’s talking about half the time, but I enjoy it on the level of a series of portraits of nightmarish grotesques. You could imagine Mervyn Peake illustrating it.

What is it about speculative fiction, in general, that most appeals to you?
The strange, the grotesque, the absurd; the capacity of really strange fantastic fiction to reflect back how odd the actual world is. Also, monsters.