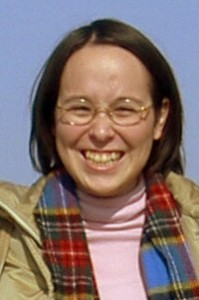 Aliette de Bodard lives in Paris, France, where she holds a job as a Computer Engineer and writes fiction in her spare time. Her short stories have appeared or are forthcoming in venues such as Interzone, Realms of Fantasy and Gardner Dozois’s The Year’s Best Science Fiction. She was a Writers of the Future Winner in 2007. In addition to writing, she also reviews fiction for The Fix Online.

So what did you do when you were notified about the nomination?
I was waking up and preparing for a very intensive meeting at six in the morning, and decided to check my emails on a whim. What happened next was, in order: I stifled a scream not to wake up the neighbours, stood uncertainly for a split second before going to wake up my boyfriend and screaming into his ear (which was really a mean thing to do to him this early in the morning for which I’ll have to make up), and reread the mail to be sure I hadn’t dream the whole thing. Then I forgot about it for the whole day, because I couldn’t afford to be distracted by this.

How long have you been writing?

That rather depends on the definition of “writing”, I suspect… I started writing in earnest about ten years ago, when I completed several embarrassingly bad novels, but I wasn’t really serious about it until four years ago, which is when I started submitting in addition to finishing drafts.

How difficult is to write in a second language?

It’s actually not so difficult, because most of my reading also takes place in the same language, so the terms and ideas I refer to when I’m writing are already “pre-registered” in English in my brain. It did take me a few years to get to that point, though, so I suspect there is a fair amount of groundwork involved that I just don’t see anymore. The one advantage in writing in a second language is that it’s very much liberating. In French, I carry a lifetime of teachers smacking my fingers until I got the language down properly, until it’s pretty hard to actually deviate from the correct grammar and the correct phrasing: there’s a strong mental block that I’m aware of but have trouble overcoming. I feel more free in English to twist the words until they bleed, and that’s a great thing for crafting fiction. If the price to pay is the occasional gallicism, I’d say that’s more than fair.

Do you ever write fiction in French?

Weirdly enough, no, it’s not really something that works for me. As said above, I actually have very little idea of what the vocabulary of speculative fiction would be in French; and most of my writing habits and style are actually in English. It’s amazing how little of that translates into my mother tongue. Again, I suspect I could overcome this with practise, but one language is already more than  enough to keep me busy.

Is there a definable point when you realized that writing had changed from a hobby to an avocation?

I think that, if anything, it would be when I started taking it seriously: about four years ago, I made the decision that I would write and publish short stories so that I would have enough credits to get my novel published. That was when I started writing regularly and submitting to short fiction markets; and shortly afterwards, I made my first paying sales (to a since-defunct fantasy ezine called Deep Magic, and then to Shimmer). Of course, it later turned out that the novel that had started all of this was not publishable unless I butchered it, but by then I was in a position to write a much better novel anyway.

What projects are you working on now?

I’ve actually managed to whittle down the to-do pile to something manageable: I have one short story project I’m chipping at, and I’m wrapping up the first draft of an alternate-history thriller, Foreign Ghosts, which is set in a universe where China discovered America a century before Europe (it’s based on two stories published in Interzone, “The Lost Xuyan Bride” and “Butterfly, Falling at Dawn”).

What are you currently reading?

I recently read Daniel Abraham’s awesome A Betrayal in Winter (and am looking forward to both sequels). Now the top of my reading pile is one non-fiction book about Chinese culture, and Powers by Ursula Le Guin, which I’m also very much looking forward to. I enjoyed the deceptive simplicity of both Gifts and Voices, the previous books in the trilogy, and I’m told this is the strongest of the three.

What is it about speculative fiction, in general, that most appeals to you?

What I like most about speculative fiction is that it allows you either to create and sustain entirely new worlds with their own rules, or worlds that differ from ours in some important way: it could be several important scientific discoveries, or the fact that magic works, or a divergence from recorded history. As a reader, I love being immersed in such worlds for the sheer strangeness and wonder of walking the streets of a totally different city, or of seeing the landscape of a vastly changed world unroll before me, with all its idiosyncrasies. As a writer… working out and conveying the fundamental differences in mindset between the people of such a world and our own 21st-century world has to be, hands-down, the part that I prefer in writing speculative fiction.