Mary Robinette will be the Guest of Honor at IceCon 2020 in Reykjavík, Iceland, from Nov 6 to Nov 8 2020. Registration and information here. 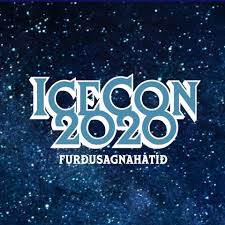 IceCon is a science fiction, fantasy and horror – also known as speculative fiction – fan convention held in Reykjavik every other year since 2016.

Over the last fifteen years there has been an explosion in the writing of speculative fiction, or SF, in Iceland and over twenty new authors have appeared on the scene, which did not really exist until early this century. Among the pioneers of the last century are authors like Heiður Baldursdóttir and Kristmann Guðmundsson, who wrote science fiction under the pen name Ingi Vídalín.

Furðusögur is an Icelandic term that encompasses the full range of science fiction, fantasy, weird fiction, fairy tales, and horror stories. It is now the term of choice among writers of the genre in Iceland and is hopefully gaining a general foothold in the collective literary consciousness of Iceland.

In 2016, an international SF convention was held in Iðnó in Reykjavik, called IceCon 2016, where various aspects of the genre were discussed. These included the ways in which contemporary issues are reflected in stories written today, as well as a special focus on Nordic traditions within the genre. The convention was well received, and we were extremely happy with the outcome. With wind in our sails, a second IceCon was held in 2018, working with the same format, which was also a success. Non-Icelandic guests of honour at the conventions were US Hugo award winners Elizabeth Bear and Naomi Novik, and Swedish Crawford award winner Karin Tidbeck.

We are now planning the third SF fan convention in Reykjavik early November 2020, and one of our guests of honour is the newly announced Hugo prize winner, Mary Robinette Kowal. Having her over here is a great honour. It is the hope of authors and readers of SF in Iceland that IceCon will continue, as it strengthens the field of Icelandic speculative fiction, both for authors and readers, and encourages Icelandic SF authors to continue writing.