Boy… Mom and I really DO look alike There are photos from when we were the same age as little girls that look like the same child in different clothes.

We’ve got an inch on the ground in Chattanooga and it’s still coming down. Those of you from places where it really snows, hush. This is the first time in my life that I’ve had a white Christmas. I’m fully aware that the snow isn’t making it under the trees yet but it’s covering the rest of the ground. Snow! END_OF_DOCUMENT_TOKEN_TO_BE_REPLACED

The arrival of my brother and an outing for barbecue

Today has been a lovely day. Although Mom had the house mostly decorated for Christmas, I helped put some additional greenery up and made some arrangements. On Christmas Eve we’ll have dinner for thirty-three, which will be delightful. It’s all family extending out to third cousins.

Meanwhile, my brother and his children arrived this evening making the house feel very full and cozy. The group of us went out to Couch’s barbecue for dinner.  I love this restaurant although my whole pretense of being vegetarian stays by the curb when I go inside.  Mmm… 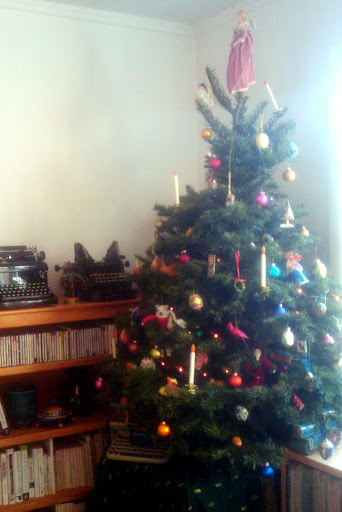 Because Rob was out of town until Monday and I’ve been working a lot, we hadn’t had a chance to get a tree until yesterday. You know… Christmas Eve. We walked to the tree lot that’s two blocks from our apartment but they were gone.

That was okay, because there was another one at the foot of the hill, so we walked down to 42nd where that tree lot was also gone. It turns out that all the tree lots wrap things up so by four o’clock there’s no where to buy a tree.

We figured that Fred Meyer would be open and have leftover trees so we walked down to 30th and on the way passed a tree lot. With Trees! But it was locked and the attendants had gone home.  Although we joked about hopping the fence, I suggested taking the somewhat more legitimate route and going into Freddie’s to actually purchase a tree.

Five dry, needle-dropping trees that were free, probably because they were fire hazards.

So we walked back to the abandoned tree lot and Rob hopped the fence. We took a tree and left a note and $20.  Actually, poaching a Christmas tree has a long tradition in my family.  For decades my [unnamed relative] has poached a cedar from [redacted] on the grounds that it is growing in a place where it has to be removed anyway.  It’s nice to have these family traditions.

AMC – Six Fantastic Candidates for the Next Santa Claus

Merry Christmas! One of the things I love most about this time of year is that its the one time of the year when fantasy and the real world intersect.  I mean, in households all around the world, people are participating in the world’s largest fairy tale as they open presents under the tree to see what Santa brought them. (St. Nick is, after all, described as a “right jolly old elf.”) Granted Santa is unique in the world of elfdom, but it’s possible that any number of his kin could rise to the occasion. So let’s take a look at some fantasy elves who could carry the mantle, should the big guy ever decide to take a year off.

Check out my complete list at of Six Fantastic Candidates for the Next Santa Claus.

The party favor for Christmas 2008 I wrote this on December 23rd, but forgot to post it.

I’ve mentioned that my family has a giant Christmas Eve dinner every year with cousins and multiple generations getting together. This year is the 52nd annual dinner and we’ve got 31 people attending. One of the things that I loved when my grandmother was hosting the party were the party favors, which were always homemade Christmas tree ornaments. After she passed away, I took over the party favors.

This year, when I got to Chattanooga I was a little stressed because I had 10 more party favors to make. I normally have them all made before I get home but time was tight this year.

To my surprise and joy, my niece Katherine pitched in to help me make them. We stayed up until 2 am sewing and laughing together. It was just great to have one on one time with her. Although, I’ll admit that it added to my general feeling that our Christmas’s are straight out of Norman Rockwell.

I failed to link to two of my twitfics up at Thaumatrope. The rules on this one are simple. For 8 days, post 1 thing every day that made you happy. Then tag 8 other people.

Here’s mine. Last night I sat in front of the fire in my parents’ house with Rob and talked to my folks. Look! The stockings are hung by the chimney with care.

It’s snowing big, beautiful fluffy flakes right now as we’re getting ready to head out to the airport. We’ve given ourselves extra time to get there. The flight is listed as being on time and the snow is supposed to turn to rain about the time we’re due to take off. Fingers crossed, eh? I am a total sucker for Christmas. Complete. To my very core, sucker for Christmas. Every year, my extended family descends on the house my grandfather built for a Norman Rockwell affair: We’ve got third-cousins twice-removed, there’s caroling, dinner for thirty-four people and a talent show. So it should come as no surprise that I have a soft spot for Christmas movies, so many of which by their very nature fall into the fantasy category. Christmas is, after all, a time for magic, so here are my favorite Christmas movies that celebrate the season with a healthy dose of magic and wonder.

Swing by and tell me what your favorite Christmas movies are.

The 2005 winner of the Synchronized Christmas lights competition… You won’t believe it unless you watch. Trust me.

Now that’s someone who takes their Christmas lights seriously.

Christmas Movies of the SF Writers

First snow of the season

I came out of the store and tiny crystals were drifting in the air. Â They weren’t even snowflakes, more like glitter. As people stepped out their doors for the first time, they all seemed to repeat the same thing, “It’s snowing!” even when there wasn’t someone with them. Â Everyone was walking with their faces up turned and smiling Â Â By the time I got home they had thickened to a proper snow, although there’s no chance that it will stick. Still, it’s beginning to feel a lot like Christmas.

Yesterday we went over to Grandma’s as the rest of the extended family descended on her house. It was good to catch up with my many cousins to find out just a little about what was going on in their lives. There’s never enough time, of course, especially as the family keeps growing. I met, let’s see…my new first cousin twice-removed. That wouldn’t be as impressive if she weren’t my grandmother’s great-great grandchild. Can you even imagine having great-great-grandchildren? Grandma’s 102 and still going strong.

On my dad’s side the extended family is broader, with third and fourth cousins abounding. I like having family and coming home to see them.

At the moment, I’m sitting in front of the fireplace with my dad. Normally, I say that I write daily so my folks don’t think I’m dead and this post started as an easy way to leave a toy for my dad to play with when we leave tomorrow (The Music Text Composition Generator ( A free online music utility)) but I gotta tell you, sitting here all I can think about is how glad I am to be home and how much I’ll miss everyone when I go back to New York.

Meanwhile, before I get to maudlin, really do go play with the Music Text Composition Generator. Try composing something that is interesting to read which doesn’t sound awful when you listen to the midi file it creates. This post? Ouch.