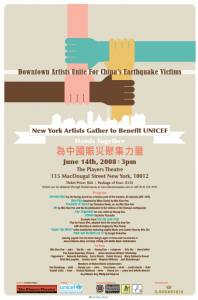 New York â€“ The Players Theatre will host Hands together: New York Artists Gather for China Earthquake Relief to Benefit UNICEF presented by Matrix Music Collaborators on June 14, 2008, 3pm, 115 MacDougal Street (between W3rd and Minetta Lane) in Greenwich Village, New York. Admission is $45 / Package of Four for $125. All proceeds will go to U.S. Fund for UNICEF. Tickets can be obtained through TheaterMania (www.theatermania.com) at (212) 352-3101. For individual donations, please visit www.unicefusa.org/ert for U.S Fund for UNICEF.

On May 12, 2008 the largest natural disaster in a generation struck Sichuan province in China.

According to date recently collected by UNICEF, more than 10,000 school buildings in Sichuan were badly damaged by the earthquake. Almost 7,000 schools were completely destroyed and many others suffered partial damage. UNICEF estimates that the number of school children affected is in the millions. Most of these children are now trying to continue their schooling in temporary shelters and tents. Precise figures are still very difficult to obtain. As the death toll from the earthquake exceeds 68,000, according to official estimates, the needs of survivors are growing daily. At least 300,000 people were injured and 5 million displaced. Now in the aftermath we can see that the scale of the humanitarian crises before us is truly staggering. Supplies are being rushed to the five million are literally without shelter. Like so many Americans we stand together with the people so deeply affected by this massive earthquake to find ways to help.

This special performance will feature an international line up of artists to include Min Xiao-Fen; Wu Na; Huang Ruo; members of the Pan Asian Repertory Theatre; Asian American Writersâ€™ Workshop; the cast of puppeteers from Peter and the Wolf and Matrix Music Collaborators. It is geared for all ages.

The North of Sunset by Thelonius Monk, arr. by Min Xiao-Fen

Excerpts from The Joy Luck Club

a play by Susan Kim, adapted from the novel by Amy Tan with direction & musical staging by Tisa Chang

Peter and the Wolf, Op. 57 by Sergei Prokofiev

Internationally known for her virtuosity and fluid style, Min Xiao-Fen has influenced countless Chinese musicians and her influence expands to players of all instruments and beyond China as well. She is a breathtaking virtuoso and courageous pioneer in both orchestral and underground projects, plays traditional and modern composition and her interpretations of the music of Duke Ellington, Thelonious Monk and Miles Davis, as well as her own experimental music for the pipa. She played solo concerts at the Utrecht International Lute Festival, the Vienna Music Festival, the Brussels Lute Festival and the New York Guitar Festival and performed a solo set of the music of Thelonious Monk for Jazz at Lincoln Center. www.bluepipa.org

Wu Na began to learn guqin at nine. She graduated from the Central Conservatory of Music in 2004 being conferred the masterâ€™s degree of quqin, and joined the Central Ensemble of the Folk Music as a guqin player. In 2002, she won the champion in the young professional group of The National Youngstersâ€™ Game of Art â€“ Solo Game of Chinese Traditional Instruments sponsored by the Ministry of Art. In 2004 to 2007, she was invited by Cuijian and Dou wei, the Chinese rockstars, to be the guqin player with the way of the improvisation to participate in their solo concert and publications etc. In 2005, became the host of â€œsilkcottonhouseâ€, which is a traditional culture and arts studio of Chinese.

Brief history about the pipa and qin:

The history of pipa goes back two thousand years. The Chinese sound “pipa” is made when it’s plucking: the downstroke is ‘pi’, the upstroke is ‘pa’, is a four stringed, pear-shaped with a crooked neck. A very difficult instrument to master – there are more than 70 techniques used to play the pipa â€“ it has six inverted frets and up to twenty-four bamboo frets, and the strings are tuned A-d-e-a.

Qin or Gu Qin is also known as seven-string qin. Qinâ€™s history spans for about three thousand years. Qin music is the most effective form of musical expression that displays the spirit and essence of the Chinese ethnic musical culture

Sergei Prokofiev’s classic Peter and the Wolf is re-imagined by Mabou Mines co-artistic director Terry O’Reilly and Jane Catherine Shaw to speak to the experience of children newly immigrated to the USA as well as young native New Yorkers. The ensemble players of the Matrix Music Collaborators becomes a playground for the puppets – a garden of delight for Peter and his animal friends and safety from the wolf outside the gate. featuring puppets from the famed Guangxi region of China to animate this best known of all compositions for children. Puppet design is by Simon Wong, artistic director of Ming Ri Institute for Arts Education Ltd. in Hong Kong. Additional puppets by Mary Robinette Kowal and Jane Catherine Shaw.

Oblivion (1984), a melancholic and one of the most celebrated works by Astor Piazzolla, represents the peak of his popular acclaim. Re-imagined by Sheryl Lee with studio tracks and mixing by Ted and Maurice Clayton of One20 Productions.

Matrix Music Collaborators, a New York-based innovative chamber ensemble presents interdisciplinary collaborations through the unique approach of bridging dance, theater, visual art, film and poetry with classical, experimental, contemporary and world music, sharing the stage with an international roster of accomplished musicians. These artists maintain their busy schedules touring all over the world as soloists and recording artists, while performing with the Metropolitan Opera, New York Philharmonic, Kansas City Symphony, St. Louis Symphony, Lincoln Center, and at some of the world’s most prestigious festivals such as Aspen, Tanglewood, Spoleto, Verbier in Switzerland, to name a few. www.thematrixmusiccollaborators.com

Established in 1991, The Asian American Writers’ Workshop, Inc., is a nonprofit literary arts organization founded in support of writers, literature and community, devoted to the creating, publishing, developing and disseminating of creative writing by Asian Americans. www.aaww.org

Built in 1907 and converted into a theatre in the late 1940’s, The Players Theatre has been a jewel in the midst of beautiful Greenwich Village, serving as a magnet for performing artists and their audiences. The theatre has been home to such long run productions as An Evening with Quentin Crisp, Psycho Beach Party and Ruthless starring an 8yr old Brittany Spears, Natalie Portman and Legally Blonde the Musicalâ€™s Laura Bell Bundy. The theatre is now home to the controversial comedy The Feminazi starring Suzanne Willett, and the famous CafÃ© Wha?, which has been a Greenwich Village mainstay since the 1960â€™s. www.theplayerstheatre.com

For more than 60 years, UNICEF has been the worldâ€™s leading international childrenâ€™s organization, working in over 150 countries to address the ongoing issues that affect why kids are dying. UNICEF provides lifesaving nutrition, clean water, education, protection and emergency response saving more young lives than any other humanitarian organization in the world. While millions of children die every year of preventable causes like dehydration, upper respiratory infections and measles, UNICEF, with the support of partnering organizations and donors alike, has the global experience, resources and reach to give children the best hope of survival. For more information about UNICEF, please visit www.unicefusa.org.