Alexandra Rowland is joining us today with her debut novel A Conspiracy of Truths. Here’s the publisher’s description:

A wrongfully imprisoned storyteller spins stories from his jail cell that just might have the power to save him—and take down his jailers too.

Arrested on accusations of witchcraft and treason, Chant finds himself trapped in a cold, filthy jail cell in a foreign land. With only his advocate, the unhelpful and uninterested Consanza, he quickly finds himself cast as a bargaining chip in a brewing battle between the five rulers of this small, backwards, and petty nation.

Or, at least, that’s how he would tell the story.

In truth, Chant has little idea of what is happening outside the walls of his cell, but he must quickly start to unravel the puzzle of his imprisonment before they execute him for his alleged crimes. But Chant is no witch—he is a member of a rare and obscure order of wandering storytellers. With no country to call his home, and no people to claim as his own, all Chant has is his wits and his apprentice, a lad more interested in wooing handsome shepherds than learning the ways of the world.

And yet, he has one great power: his stories in the ears of the rulers determined to prosecute him for betraying a nation he knows next to nothing about. The tales he tells will topple the Queens of Nuryevet and just maybe, save his life.

What is Alexandra’s favorite bit? 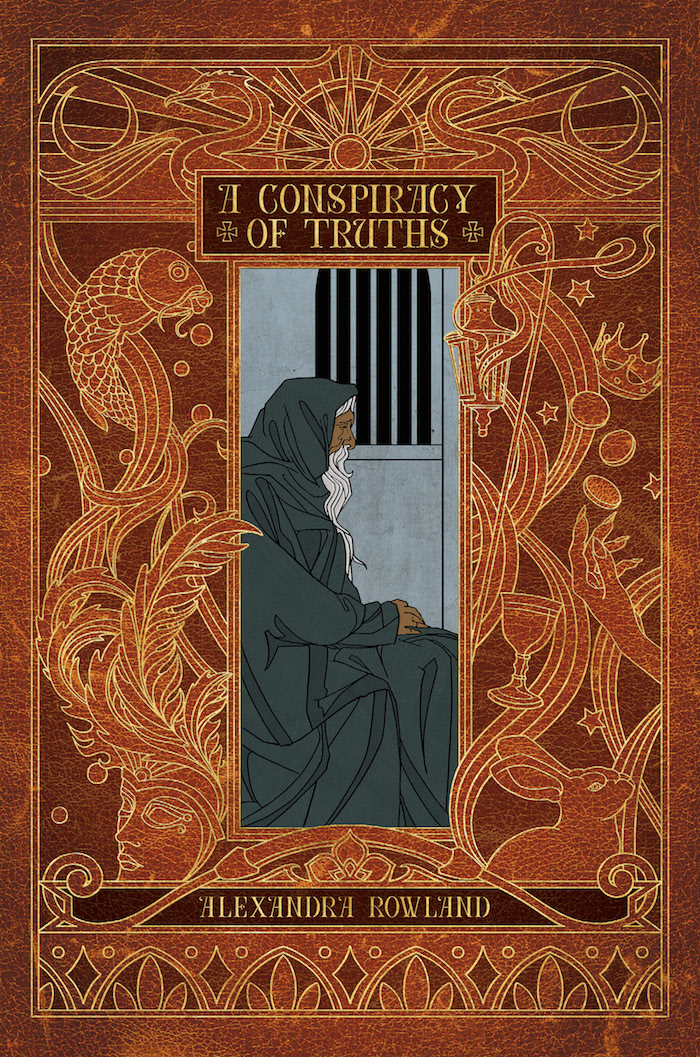 “I didn’t miss him, mind you. Not at all. I was just rather pleased to know he wasn’t dead[. . .] My heart was behaving rather oddly—felt all light, like a soap bubble. Not because I was happy to see Ylfing. I was probably having a heart attack at that moment, that’s all.”

The narrator of A CONSPIRACY OF TRUTHS is a crotchety, opinionated old man called Chant, a wandering mendicant storyteller who has been arrested on charges of witchcraft and, in the first scene, accidentally indicts himself as a potential spy. For the first one hundred and thirty-three pages of the book, he is locked in a cold, isolated jail cell awaiting the results of that trial with nothing to do but complain and no visitors except his lawyer, and during this time he regularly assures the reader that:

1) his apprentice, Ylfing, is an idiot, and
2) he doesn’t miss him at all. Really. Really he doesn’t. Not even a little bit. In fact, Chant hardly even thinks about him, and he certainly doesn’t worry about him. (Unfortunately, being a debut author means your publisher just can’t splurge on book-printing technology like “ten-foot-tall letters of fire that spring from the page to spell out L I A R.” Such a shame, because this would have been a good place for it.)

All first-person narrators should be considered, to some degree, unreliable because all people are unreliable. None of us gives a perfectly objective report of the events that happen to us—and Chant definitely doesn’t. Sometimes he lies on purpose; sometimes he lies accidentally, simply because he hasn’t interrogated his own biases and preconceived notions. This (paired with the vibrancy of his opinions and the staunchness of his intent to inflict them on the world around him) is one of several reasons he was so much giddy fun to write, and this scene in particular, where he’s reunited with the apprentice he tooooooootally isn’t even a little bit fond of, who isn’t at all like a much-beloved nephew or grandson, is the first moment we truly and clearly see how much Chant might be misrepresenting himself and his feelings.

Ylfing as a character is something of a foil to Chant—where Chant is grouchy and sharp-tongued and prickly, Ylfing is a cinnamon roll of a human: soft and sweet and warm, effortlessly kind and good (and smart, and insightful, and well-suited to the profession to which he’s apprenticed). For all his gruff bluster, Chant values that softness—he sees worth in the way Ylfing runs at the world with his arms outstretched and the doors of his heart flung wide open. That’s part of the profession, after all: opening yourself up to embrace the whole world. Ylfing is better at it than Chant is.

The scene of their reunion is a moment where Chant, a master storyteller, tells a story that fails. He tries to dissemble about the depth of his affection, and… can’t quite bring himself to be convincing about it.

We learn who we are by the way we respond to the people around us, as if each person holds up a mirror to reflect a small piece of ourselves, and we assemble our self-image from the patchwork of those reflections. The long-awaited arrival of Ylfing (one of the last characters to join the cast) influences how we think of Chant more than any other person in the book – for the first time, we see Chant interacting with someone who knows him, who loves him, and that gives us a wildly different perspective than we have gotten before in the book. Chant says, a little later on: “For all my apprentice is a genuine idiot, I’ll allow he can spot a soft heart from a mile off. Or perhaps it’s just that hearts soften after he spots them.” Chant’s, at least, certainly does, and that says as much (or more) about him as it does about Ylfing.

So that’s my favorite bit: The introduction of Ylfing! He’s a candle that illuminates some of Chant’s much deeper complexities, he introduces a paradigm shift in how the reader perceives Chant’s representation of himself, and… Well, to be honest, he’s my favorite child. I mean look at him– he’s a golden retriever puppy. He’s a cinnamon roll. He’s kind and genuine and adorable, and hearts soften after he spots them — five bucks says yours will too.

Alexandra Rowland is a fantasy author, game monitor at an escape room company, and occasional bespoke seamstress under the stern supervision of her feline quality control manager. She holds a degree in world literature, mythology, and folklore from Truman State University, and she is a host of the literary podcast, Be the Serpent. Find her at www.alexandrarowland.net or on Twitter as @_alexrowland.