Michael J. Martinez is joining us today to talk about his novel MJ-12: Endgame. Here’s the publisher’s description:

A Cold War fought by superhuman agents reaches a boiling point in the thrilling finale to the MAJESTIC-12 historical thriller/superhero mash-up series from Michael J. Martinez.

Josef Stalin is dead. In the aftermath, the Soviet Union is thrown into crisis, giving former secret police chief Laverentiy Beria exactly the opening he needs. Beria’s plan is to secretly place his country’s Variants―ordinary people mysteriously embued with strange, superhuman powers―into the very highest levels of leadership, where he can use them to stage a government coup and seize control of the USSR.

America’s response comes from its intelligence communities, including the American Variants recruited for the top-secret MAJESTIC-12 program, who are suddenly thrown into their most dangerous and important assignment yet. From the halls of the Kremlin to the battlefields of Korea, superpowered covert agents face off to determine the future of the planet―a future their very existence may ultimately threaten. 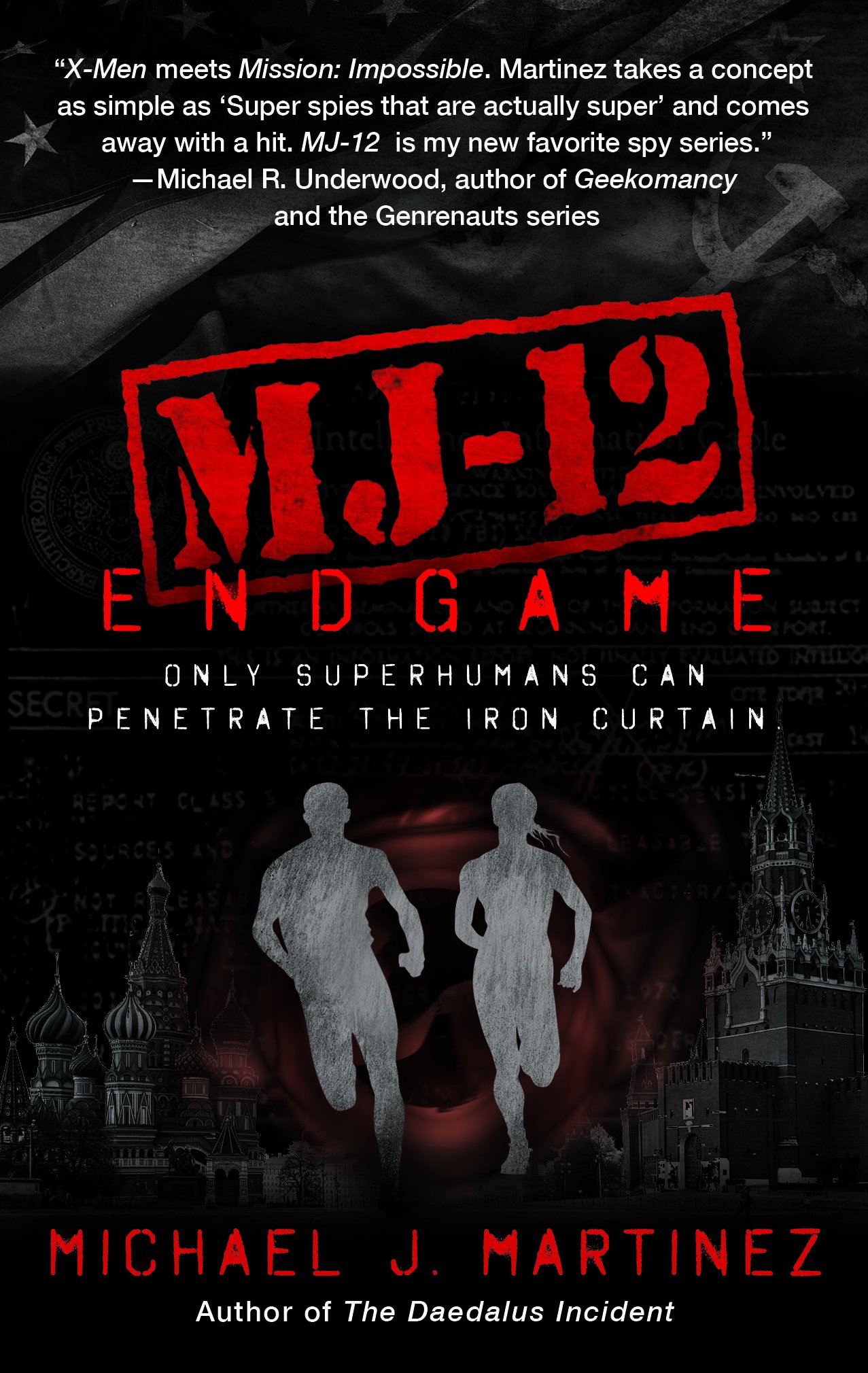 Three novels into a series, one ends up racking up quite a few favorite bits. It’s my work, after all, so I should hope I like it! And there’s a lot I really like about MJ-12: Endgame, from the way the characters have grown and developed, how things unfolded to bring the series to a satisfying…wait for it…endgame.

But one of the running themes in the story is how these characters – normal people suddenly gifted with extraordinary abilities and pressed into service as covert agents – deal with the “gifts” they’ve been given. In this book, superpowers come with trade-offs, and some of them are pretty severe.

Frank Lodge has the ability to absorb the skills and knowledge from people at the moment of their deaths – but must also contend with memory and personalities. Maggie Dubinsky can manipulate emotions, but at the cost of her own stability. Only technological “null-generators” can interfere with their abilities, and also cut them off from the side effects.

How they deal with all this has evolved differently for each person. For example, take this conversation between Frank and Maggie as they walk through a Moscow park undercover:

“Don’t you shut it off now and then? I do. If the voices are particularly rambunctious, I’ll flip on a generator for a few hours just to get some peace and quiet,” Frank said.

“You do that?” Maggie asked, eyebrows raised. “Don’t you feel strange without them?”

Frank just shrugged. “It’s nice. There’s no running commentary in my head. No analysis of every little thing I do. No opinions on how to cook a goddamned egg, or whether I’m doing enough weights at the gym, or arguments between voices on what’s the most authentic way to eat caviar with tea.”

“Yeah, just now at the hotel. Apparently, you can either serve it on half a boiled egg, or on bread with butter. If they weren’t just disembodied voices attached to random memories, I’d swear the people in my head would’ve ended up in a fist fight.”

Frank thought that would make Maggie laugh, but she just shook her head. “All that company with you, all the time. You’re never lonely. That’s something.”

“Wish I were sometimes,” Frank said. “That’s why I use the null generator, just to get some alone time. You don’t ever use one?”

“You mean exactly how the rest of us live our lives?” Frank asked. “I have no idea how people are feeling except for what they say or how they look.”

“Most people hide it well,” Maggie replied, clutching Frank’s hand a little tighter as they walked, part of their married couple ruse, an old tradecraft habit. Their Russian tails likely already had a brief on them anyway. “But under the surface, they carry around so much anger. Disappointment. Lust. Sadness. All of it. That shit builds up and you never know when one of ’em is just gonna pop. The average person is just a stupid, instinctual, emotional powder keg ready to blow. All they need is the right push. And I don’t wanna be around when that happens.”

“People are shit, Frank. They really are. In the end, they’re just fight or flight, pleasure and pain. Everything else is just window-dressing to cover up the fact that they’re animals.”

So that’s my favorite bit in MJ-12: Endgame, and perhaps in the entire series. I like that as these powers have grown to be part of these characters, their attitudes and perspectives have changed dramatically – and maybe not necessarily for the better.

Michael J. Martinez is the author of the Daedalus trilogy of Napoleonic era space opera adventures as well as the MAJESTIC-12 series of superpowered spy-fi thrillers. He likes mashing genres together, obviously. His short fiction has appeared in Unidentified Funny Objects 4, Cthulhu Fhtagn!, Geeky Giving and The Endless Ages Anthology for Vampire: The Masquerade. He recently moved to Los Angeles and already misses rain and cold weather, but is otherwise thriving. He can be found online at michaeljmartinez.net and on Twitter at @mikemartinez72.