Ilana C. Myer is joining us today to talk about her novel Fire Dance. Here’s the publisher’s description:

Lin, newly initiated in the art of otherwordly enchantments, is sent to aid her homeland’s allies against vicious attacks from the Fire Dancers: mysterious practitioners of strange and deadly magic. Forced to step into a dangerous waltz of tradition, treachery, and palace secrets, Lin must also race the ticking clock of her own rapidly dwindling life to learn the truth of the Fire Dancers’ war, and how she might prevent death on a scale too terrifying to contemplate.

Myer’s novel is a symphony of secret towers, desert winds, burning sands, blood and dust. Her prose soars, and fluid movements of the politically charged plot carry the reader toward a shocking crescendo. 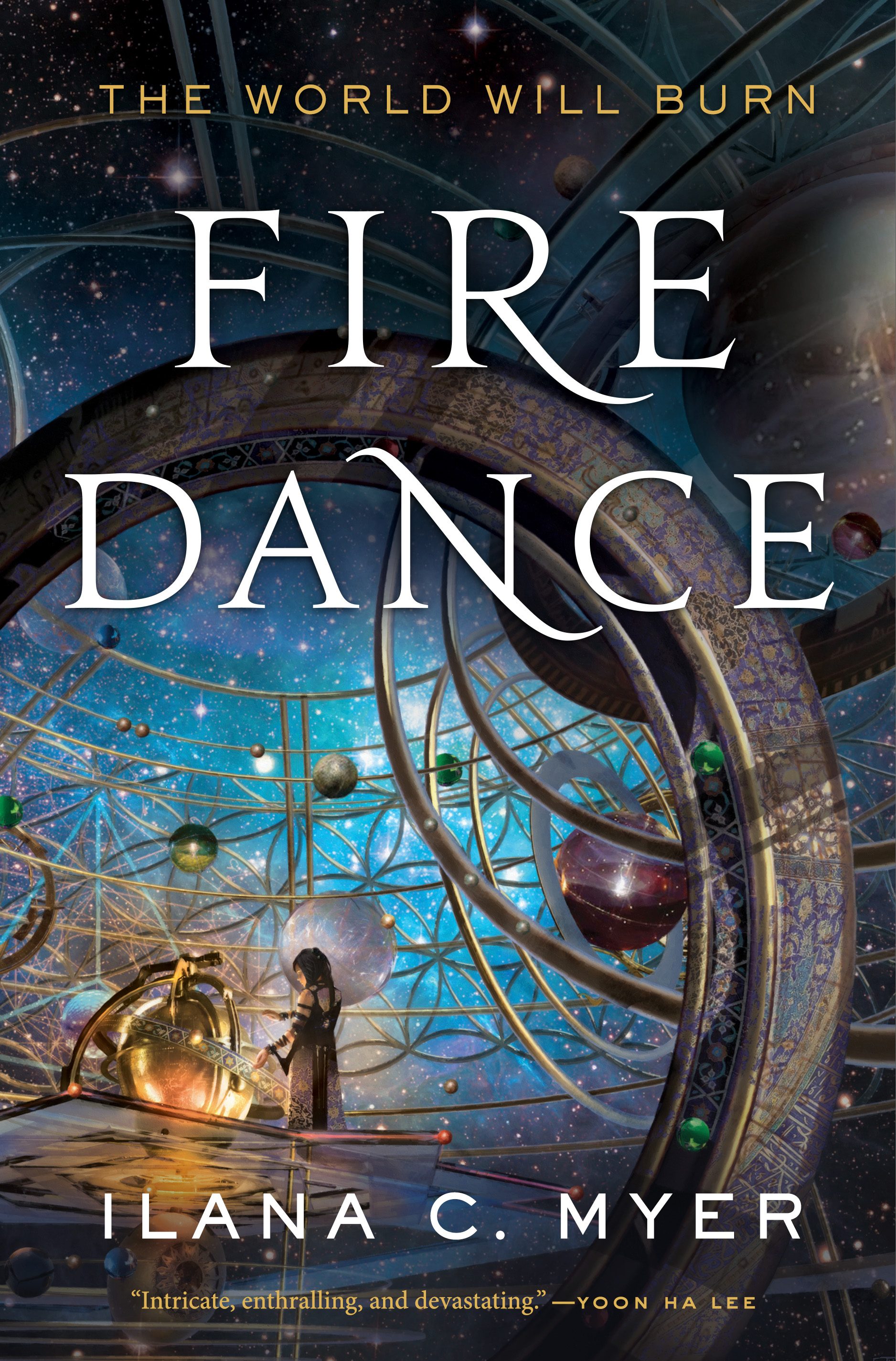 The title of a book can evolve in a variety of ways. The title for Fire Dance works on multiple levels—in terms of a mysterious form of magic, revealed in the course of the plot; in terms of the passions that fuel the protagonists. And there is another way.

Two settings, extremely different from one another, are the focal points of Fire Dance. One is the court of the Zahra, a place of luxury, political sophistication, and lush imperial gardens. The sort of place visited by ambassadors, scholars, and physicians from around the world. It is a mix of inspirations, from Andalusia to medieval Baghdad; in constructing it, I had immersed myself in historical sources, Middle Eastern mythology and cosmology of the period, and Andalusian poetry.

Magic in the Zahra is integral to royal politics: The palace houses a magical observatory, tended by seven court Magicians who see prophecies in the stars.

The other major stage of Fire Dance is Academy Isle, a lonely, windy place on the edge of things. A place where for centuries, people study to become poets; where mysterious enchantments have been lately introduced. My previous novel set in this world, Last Song Before Night, is infused with Celtic myth and geographic similarities to the British Isles; these are the elements that permeate the Academy Isle.

Unlike the Zahra, the Academy is not accustomed to magic; how the poets handle their new powers—for good or evil—is one of the emerging conflicts in Fire Dance.

These two settings could hardly be more different, but are very much connected by means which are revealed with time. Weaving together these two settings, moving back and forth between them, came to feel like a delicate dance; their inevitable, complex intertwining, its culmination. Sometimes, to get in the mood for a certain scene, I would read poems with the kind of atmosphere I was looking to convey. For scenes in the Academy, I often found myself reaching for Seamus Heaney’s Sweeney Astray; for the Zahra, I read a range of Andalusian poetry.

In my first novel, Last Song Before Night, the characters move from the elegance of the capital to the deep woods, where they discover horrors and—at times—themselves. In contrast, Fire Dance follows a spiral structure, from grandeur to the lonely dark and back, again and again until they meet. Such a meeting can only have explosive consequences—for the characters, for the places they love.

My book is out now, so—come dance with me.

Ilana C. Myer has worked as a journalist in Jerusalem and a cultural critic for various publications. As Ilana Teitelbaum she has written book reviews and critical essays for The Globe and Mail, the Los Angeles Review of Books, Salon, and the Huffington Post. Last Song Before Night was her first novel, followed by Fire Dance. She lives in New York.