Maurice Broaddus is joining us today with his collection The Voices of Martyrs. Here’s the publisher’s description:

We are a collection of voices, the assembled history of the many voices that have spoken into our lives and shaped us. Voices of the past, voices of the present, and voices of the future. There is an African proverb, “Se wo were fi na wosankofa a yenkyi,” which translates as “It is not wrong to go back for that which you have forgotten.” This is why we continue to remember the tales of struggle and tales of perseverance, even as we look to tales of hope. What a people choose to remember about its past, the stories they pass down, informs who they are and sets the boundaries of their identity. We remember the pain of our past to mourn, to heal, and to learn. Only in that way can we ensure the same mistakes are not repeated. The voices make up our stories. The stories make up who we are. A collected voice. 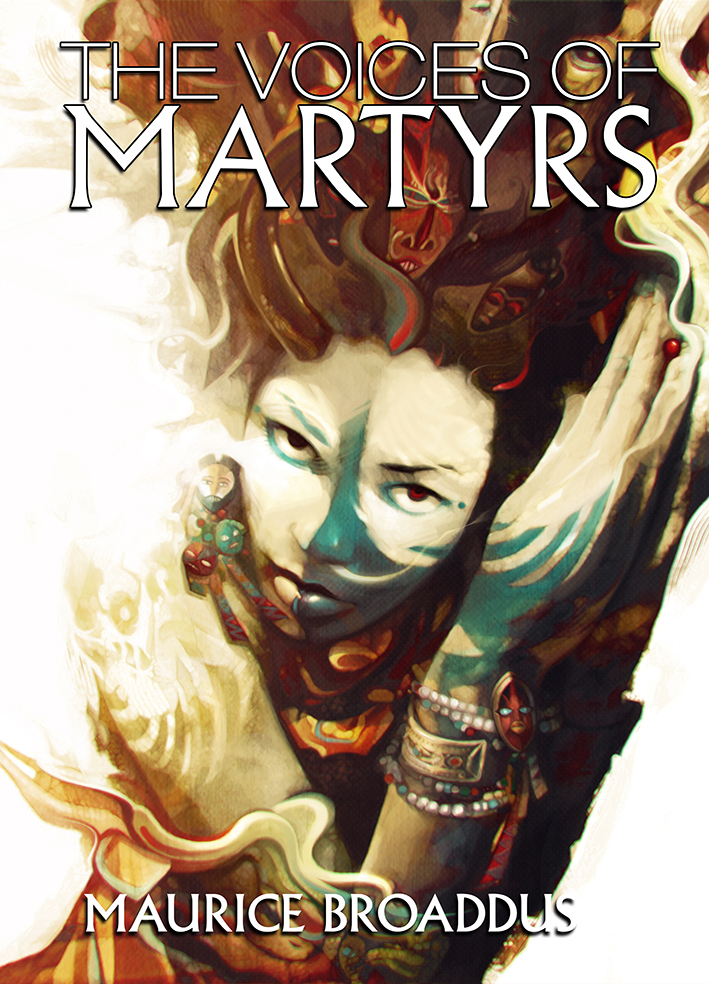 My collection, The Voices of Martyrs, represents nearly a ten year span of my writing career. I wanted to wait until I had enough stories published before I began to choose stories for a collection. I noticed that my stories could be very easily grouped into tales from the Past, tales from the Present, and tales from the Future. It opens with a story set in ancient Africa and closes with one set on a colony in the far reaches of space. It’s a little known fact that for a long time my working title for this collection was “Black to the Future.”

But my absolute favorite bit is the inclusion of two “orphaned” stories: “Shadow Boxing” and “The Volunteer.” These two stories were previously unpublished, orphaned because they were originally written for hyper-specific anthologies that either never came out or had to be cut after solicitation. This is the “Cockroach Vampires” lesson all over again: once there was a call for stories for an anthology about cockroach vampires *don’t ask: it started as a joke on a message board and then a publisher jumped in) that a lot of writers ended up writing for. The anthology (shocker!) never came out, so a lot of writers were left with stories about, well, you know, which they then flooded all of the markets with. And oddly enough, not a lot of editors were looking for such stories.

This actually happens quite a bit. There’s an open call for a theme anthology or writers get invited to submit to some niche project. Those invitations, much less the submissions, aren’t guaranteed acceptances. The story may not fit with the others or for some reason out of everyone’s control has to be cut. It’s the chance you take when choosing to write for them. You learn to either make the story not so specific that you can’t sell it elsewhere or say to yourself early on, should you get rejected, “I guess I’ll save it for my collection.” And these are two of them, a fact that tickles me to no end.

Orphaned stories included, Publishers Weekly says of The Voices of Martyrs that “the lush, descriptive prose tantalizes all the senses, drawing the reader into a rich world spanning both miles and centuries. Hints of magic in both the past and present, as well as the science fiction elements of the future stories, make this an exciting exploration of genre as well as culture.” Writing short stories is my first love and finding them good homes is always my favorite bit.

With nearly one hundred stories published, Maurice Broaddus’ work has appeared in Lightspeed Magazine, Weird Tales, Apex Magazine, Asimov’s, Cemetery Dance, Black Static, and many more. Some of his stories have been collected in The Voices of Martyrs. He is the author of the urban fantasy trilogy, The Knights of Breton Court trilogy. He co-authored the play Finding Home: Indiana at 200. His novellas include Buffalo Soldier, I Can Transform You, Orgy of Souls, Bleed with Me, and Devil’s Marionette. He is the co-editor of Dark Faith, Dark Faith: Invocations, Streets of Shadows, and People of Colo(u)r Destroy Horror. Learn more about him at MauriceBroaddus.com.