Our cats have a water fountain. So spoiled. 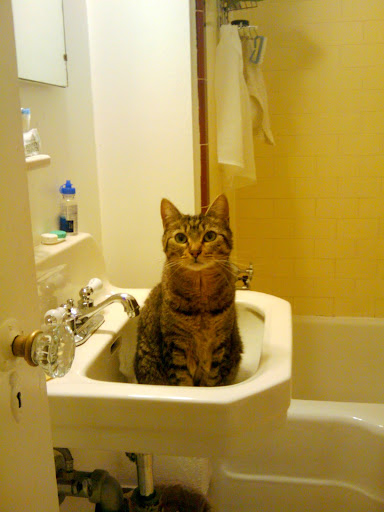 Harriet has taken to drinking out of the bathroom sink.  She’s so excited about it that she will sit in the sink waiting for us to come in and turn the water on.

The problem is that she’s not very good at it.  Frequently, she’ll just shove her head under the running water and let it dribble through her fur and drink from the water running off her nose. She will also try to bite the stream of water. Mostly she’s been licking up the water that’s splashed everywhere.

No amount of cleaning her actual water bowl convinced her to use it and we’re concerned that she wasn’t drinking enough. Yesterday I picked up a pet fountain from PetCo for her and Marlowe.

Meanwhile, Harriet is still sitting in the sink.